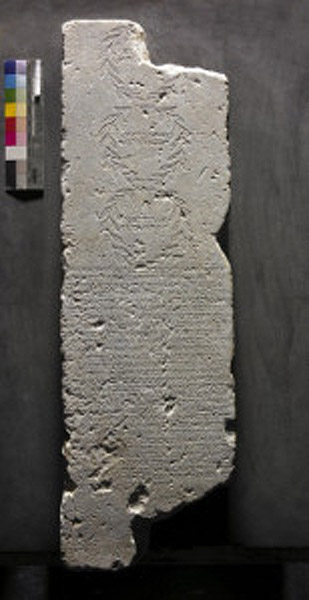 A Greek inscription held in Liverpool since 1901 gets published

It is neither new per se, nore a new arrival in the UK.  Composed during the  3rd century BC somewhere in the Asia Minor (modern day Turkey) and held in the collections of the World Museum, Liverpoo, since 1901, the Phrikyladai Decree and its content had been unknown to the modern world. Now, the work of two researchers and a devoted curator brings it back to life.

Last spring, Dr Georgina Muskett, curator of classicasl Antiquities at the Liverpool Museum brought the millenium-old inscribed slab to the attention of researchers Polly Low and Peter Liddel. And it was only lately that Drs Liddell and Low, both classical researchers at University of Manchester, presented the inscription during an epigraphy workshop held in Oxford (Centre for the Study of Ancient Documents)  as a paper under the title “The koinon of the Phrikyladai: a new decree from Liverpool”.

“Dr Muskett and her team have been unfailingly helpful (and, as the ‘before’ and ‘after’ images show, have done an excellent job of cleaning and conserving the inscription). Prof. Daryn Lehoux (now at Queen’s University, Canada, but a former colleague in Manchester) visited in the summer, and helped us to produce a set of enhanced digital images of the stone, using RTI (reflectance transformation imaging) and photogrammetry. We have bombarded our colleagues (in Manchester and around the world) with questions about the language of the text, the nature of the institutions which it describes, the plausibility (or otherwise) of our reconstructions and supplements. So although we tend, rather protectively, to talk about this as ‘our’ inscription, this is really one of the most genuinely collaborative pieces of research either of us has ever embarked on”, writes Polly Low in her blog. But what did they read?

The inscription describes itself as a gnome (decree) of a private organisation (koinon), who call themselves the Phrikyladai.The decree honours three men for their work for the association – work which has something to do with the provision of wine (the men held the office of oinones, perhaps to be translated as ‘wine buyer’). The honour comes in the form of an inscription – that is, this inscription. “In other words: the koinon indicate their gratitude by allowing these men to set up, on stone, a copy of the decree in which the indication of gratitude is expressed. Various features of the text (the terminology used; some of the names which appear in it; some stylistic features) lead us to believe that it originates from the city of Erythrae (a Greek polis on the coast of Asia Minor), and was created some time in the middle of the third century BC,” adds Low.

Still, there are questions to be answered regarding the inscription. One of the remaining mysteries of the text revolves around the meaning, or significance, of this organisation’s name. Who are the ‘Phrikyladai’?

This word is unattested anywhere else in extant Greek, and does not appear to have any immediate meaning: there’s probably nothing in the association with the words phrike (shudder) or hule (timber). “We cannot identify any city or toponym with which it could obviously be connected (our attempts to find associations with the Aeolian city Larisa Phrikonis were ultimately fruitless). Many associations took their names from mythical founders – but no Phrikylos is known in any mythical account; indeed, as a name it is attested, according to the Lexicon of Greek Personal Names, only on a Hellenistic roof-tile from Illyria. Should we then assume that our ‘Phrikyladai’ got their name from a mortal – perhaps even a living mortal — named Phrikylos? And, if they did, what sort of story should we tell about this individual, and his role in the association? Was he a member of the city elite of Erythrae? Or just a man who was particularly fond of wine?”, states Low, inviting proposals and ideas to be addressed to her or her colleague. So, the quest continues, and this time it might be a global one.