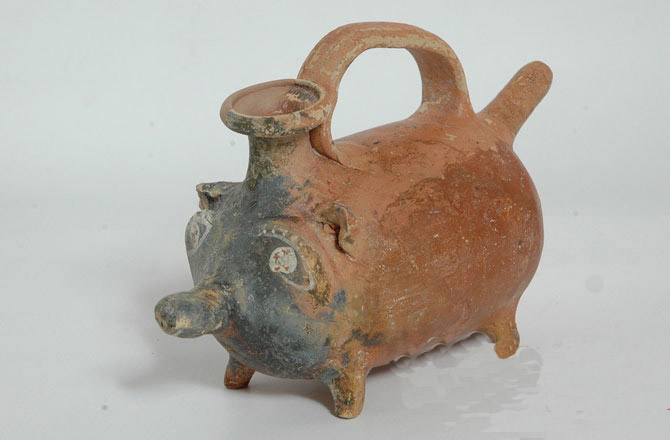 From the cradle to the grave in Manduria

Was it a toy or a modern-day baby bottle? Or both? These are the questions addressed by Italian archaeologists regarding a pig-shaped vessel discovered recently in Manduria, near Taranto in Puglia, Italy.

Known as guttus, the vessel dates back about 2,400 years. At that time, the “heel” of Italy was inhabited by the Messapian people, a tribal group who migrated from Illyria around 1000 BC. Little is known for the Mesapians, who were absorbed by later tribes only to leave behind their tombs, full with grave goods reflecting parts of their life, including their parenting styles.

Cut into rock, the 8- by 4-foot tomb where the guttus was found, was decorated with ocher, red and blue bands. It contained the remains of two individuals — in line with the Messapian custom of burying family members together in the same grave. Of the funerary objects, the team of archaeologists, led by Arcangelo Alessio (Archaeological Superintendency of Puglia), recovered about 30, including jars, plates, lamps, ointment vases, three baby feeding vessels and two terracotta statuettes depicting female subjects.

“Analysis of the funerary objects and their context suggest that two burials followed one another in the Hellenistic period, between the end of the fourth and the third-second centuries B.C.,” Alessio says regarding identifying the tenants of the tomb. At any case, archaeologists estimate that at least a man and a woman were interred at the tomb, as  a black painted basin and an iron blade of a knife suggest a male burial, while a strong clue for a female burial came from a special Messapian pottery vase called “trozzella” (featuring four little wheels at the tops of its handle, versions of the vase are often found in the graves of Messapian women).

Still, the presence of three feeding vessels would point to a third burial, possibly of a baby. Associated with two terracotta statuettes found in the tomb (often placed in burials of young girls) this burial could belong to a newborn girl.

“We might speculate that the female individual was pregnant at the time of death,” says archaeologist Gianfranco Dimitri. “It’s an intriguing hypothesis, although it is also likely that the tender baby’s bones totally decomposed over the centuries,” he added.

At any case -in our world or the afterlife- , the girl was to be fed in style. Featuring pointy ears and human-like eyes, her pig-shaped guttus was cute in sight. It was also multi-practical,  featuring terracotta rattles in its tummy to apparently encourage the baby to sleep after the meal. Not bad for a baby who lived in 1000 BC!