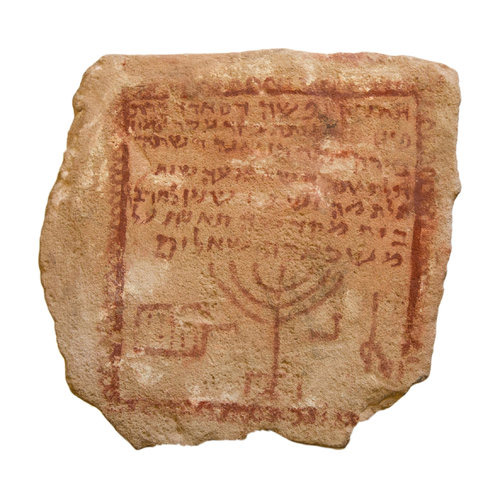 Clues From a Tombstone

A Jewish lady living in a Christian town

They figured out her first name, but not her father’s. They know where and when she died, but not her age or the cause of death. They could not tell whether she was married.

These are the clues students of the Yeshiva University, New York were able to define  on the life of a lady who lived  1,600-years ago in what is now Jordan, just though studying her tombstone.

The tombstone, with text in Aramaic, is held at the  in the Woodland Museum of Biblical Archaeology, which occupies part of the church’s campus, about 20 miles from Sacramento, California. Back in 2012, the Rev. Carl Morgan, a priest in Woodland United Fellowship, contacted Dr. Steven Fine, an expert on iconology and the director of Yeshiva’s Center for Israel Studies, who had recently published an article on Jewish tombstones in the ancient city of Zoar. “It had not been translated,” the Rev. Morgan recalled in a recent telephone interview. “I knew Dr. Fine could translate it.”.

And so he did, with a little help from his students, who took on exploring what the tombstone could “tell” during a Talmudic archaeology course of that semester. Dr. Fine showed the photo to the students and they decided to spend a semester translating the Aramaic inscriptions and learning everything they could about who the woman was.

Made of sandstone and roughly the size of a legal pad, the tombstone became a window to an ancient world centered in Zoar. According to Dr. Fine, Zoar was “a major Christian city, a biblical pilgrimage city,” but it had a sizable Jewish population. According to Hershel Shanks, the founder and editor of Biblical Archaeology Review, such a tombstone “represents a Jewish community that thrived there.”

Only a handful of Jewish tombstones from Zoar had been discovered in the early 20th century -30 to 40 had been documented according to Dr. Fine. On the contrary, far more Christian tombstones have been found, reflecting differences between the ways Christians and Jews remembered their dead. The Christian tombstones were inscribed in Greek, and most carried common Christian symbols — a cross, a fish or birds. Dr. Fine said the lettering on the Jewish ones was in a form of Aramaic that only Jews, not Christians, were taught to read. The symbols, as might be expected, included menorahs.

As for the Yeshiva students, they were confident they could make sense of the Aramaic inscriptions; Talmudic Aramaic is virtually the same as the Aramaic on the tombstone. Ellie Schwartz, a senior, recited the first words: “ ‘Here rests the soul of Sa’adah, daughter of something.’ We don’t know the ‘something.’ ”

According to a formulaic type met in other ancient tombstones, the students felt certain the missing word was the name of the woman’s father. “We have the P,” Dr. Fine said. “We thought there was an N, but we’re stuck because whatever it is, it’s been scratched away. You get to the point where ‘I can’t know’ may be the most learned answer you can give.”

If the father’s name was elusive, so was another basic fact about the woman: her age. According to Dr. Fine, Christian tombstones from that area carried ages, but Jewish tombstones did not. That was simply the custom of the day.

What was certain, was the stone’s date, which the students alongside their lecturer were able to define, based on the parallel dating systems inscribed on it. One referred to the Temple in Jerusalem, destroyed by the Romans in the year 70. The other system was based on the number seven. By comparing the two systems, they could say with certainty that she died 362 years after the destruction of the temple, meaning around 429-430 AD.

And then there were the symbols. What the students had interpret as the Ten Commandments, it was actually an incense shovel— a symbol of ceremonies in a temple.

Defined finally as a Talmudic object, part of the Jewish heritage, the stone is to be carried to Yeshiva University, to be held there. According to a proposal by Pastor Morgan, who considered the object not fitting with his Biblical period collection artefacts held in his Sacramento museum, it was agreed for the tombstine to travel to New York with an exchange of a lecture by Dr. Fine in Sacramento.