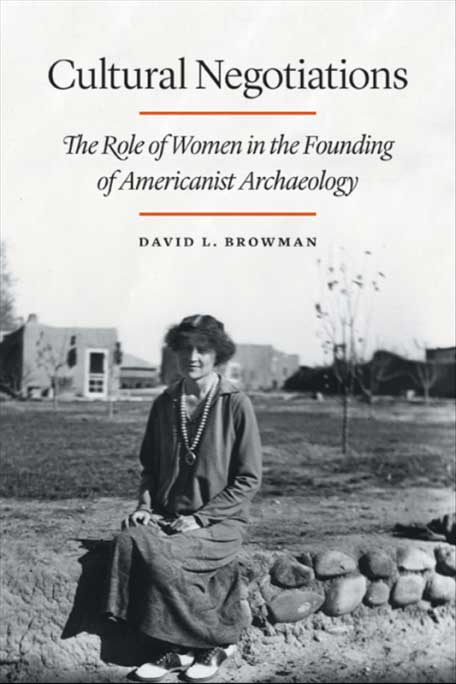 D. Browman, “The Role of Women in the Founding of Americanist Archaeology”

A few years ago, when David Browman, PhD, professor of archaeology in Arts & Sciences at Washington University in St. Louis, read his graduate student’s thesis on the early figures in Americanist archaeology, he immediately asked, “Where are all the women?”

“There were no women,” the student replied. But Browman was far from satisfied.

He realized his student had relied on the prominent anthology A History of American Archaeology, which, Browman said, “doesn’t mention a single woman prior to 1915 in the whole volume.” Even after the editors were confronted, Browman said, “the second volume had something like five or six.”

Not surprisingly, the student reasoned that “if the defining volume for the history of American archaeology doesn’t mention any women, then there must not have been any. And if there’s only a handful, they must not have done much,” Browman surmised.

However, Browman, a relative of both Elizabeth Blackwell, who in 1847 was the first woman to attend medical school, and Lucy Stone, a contemporary and colleague of Susan B. Anthony, knew better. The experience with his graduate student led him to write his book, Cultural Negotiations: The Role of Women in the Founding of Americanist Archaeology, which features the stories of more than 200 women archaeologists from 1865 to 1940.

The dates that bookend this selection are most often associated with two of America’s biggest wars, not necessarily women’s rights, but, as Browman explained, “War has allowed women more latitude.”

“Before 1860, for all intents and purposes, women were not involved in Americanist archaeology. The tremendous manpower drain of the Civil War resulted in women taking over jobs that men had traditionally filled,” he writes. The stories and anecdotes that Browman collected capture not only the history of archaeology, but also the evolution of attitudes toward women in education with a vividness that can be shocking to modern readers.

In the introduction of his book, Browman sets the tone by including Mary Wright Sewall’s 1891 list of nine arguments used against women by universities, professors and college presidents to deny them education. These include: 1) that “women are mentally inferior to men,” 2) that “the physical constitution of women makes it impossible for them to endure the strain of severe mental effort,” and 3) that the presence of women in college would make men “effeminate and weak” while the women would become “coarse and masculine.”

Even at Harvard University, which pioneered women’s education and archaeological studies at The Annex, later called Radcliffe College before being absorbed by the university, female students faced incredible obstacles to receive the same quality education as their male peers.

Not only was tuition higher for women at Radcliffe, but also, as Doris Stone writes, “In the 1920s, I was required to obtain permission from the president of Harvard to attend classes at the Peabody Museum, and with that permission came the warning that if my deportment was not entirely proper, my association with that austere building would be ended.”

Many women perceived that the only way to break into the field was to specialize in areas that men did not enjoy, such as dendrochronology, the study of tree rings, or museum work, which men considered tedious or “like housework.” Others worked in locations men avoided, such as the Arctic. In 1890, one archaeologist, Alice Palmer Henderson, moved to work in Alaska, where, she wrote, “my classification was among idiots, Indians, minors, and females.”

Some women saw marriage as a way to escape the safe and socially acceptable museum positions, marrying male peers to work beside them in the field. By 1927, there were five husband-and-wife archaeologist teams working in the Southwest alone, and more than one archaeologist noted that marriage was “virtually the only way a woman could engage in field archeology in the 1920s,” as Browman writes in his book.

Publication obstacles ultimately culled many female archeologists’ careers because they could not advance up the academic ladder.

Browman tells the story of Regina Weltfish, who successfully completed and defended her dissertation in 1929, but could not get her PhD until 1950 because one of the requirements for the degree was publication of the dissertation. However, Weltfish could not afford the $4,000 expense to publish the 120 copies required by the department to send to 75 libraries and 45 faculty members.

Departments usually paid for this cost with scholarships, but these often went to men because “they had families to support.”

“Without her official PhD degree,” Browman writes, “[Weltfish] was stuck as an untenured lecturer after teaching two decades at Columbia.”

Men were not the only perpetrators of discrimination. Browman includes the account of archaeologist Theresa B. Goell, who said in 1953, “When I was younger I used to think [men] imposed difficult conditions on women in archaeology, but I have become perhaps even stricter than you — because I can allow myself the luxury of discriminating against my sisters.”

Obviously, women’s rights have come a long way since Blackwell first went to medical school, but the echoes of this discrimination are still being felt, Browman points out, whether it be in anthologies of prominent archaeologists, in the specialties women choose to study because of lingering gender norms or even in old laws.

“When we first moved to St. Louis about four decades ago, my wife was called for jury duty,” Browman recalled. “It turned out that you could be excused from jury duty in St. Louis if you were a woman or mentally incompetent, among other reasons.” The Missouri Constitution excused women from jury duty until 1979, when the law was overturned.

“Today of course that language doesn’t exist anymore,” he said, “but these stories really resonate with me.”

Ultimately, the 200 women in Browman’s book set the stage for the great female archaeologists of today, including WUSTL’s own Patty Jo Watson, PhD, the Distinguished University Professor Emerita in Archaeology.

Since the book’s publication, Browman has heard from several female colleagues, thanking him for saying what they could not.

“They felt like they couldn’t complain about the lingering discrimination they’ve felt because people would say, ‘Oh, they’re just women. They’re just saying how sorry they are for themselves.’ But if a guy says it, than it means a whole different thing. So again, I’m taken more seriously because I’m a male.”