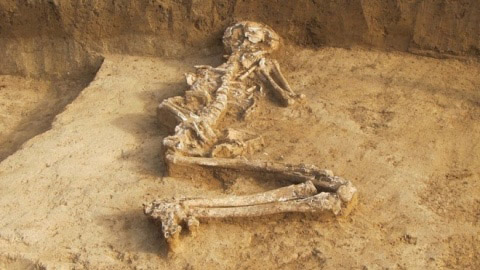 Bulgarian archaeologists have uncovered the remains of a woman that appears to have been buried while pregnant, 6.000 years ago.

The lady had been buried wearing exquisite pearl ornaments and according to the excavators, her pregnant state has been indicated by her burial position, with no further comments on the matter.

The find was made in a newly discovered necropolis in Sveshtari in north-east Bulgaria. According to the BGNES news agency, five skeletons were discovered in the necropolis, all buried in an unusual position – with their legs bound and their heads facing southwards.

Located in north-eastern Bulgaria, Razgrad region, the Sveshtari site, also known as Sboryanovo, hosts a great many remains of the Getae, a Thracian tribe whose major city of Helis is also thought to have been located nearby. Led by archeologist Diana Gergova, the locat archaeological team who uncovered the burial has been famous for revealing a 2500-year-old Thracian carriage and two horses in the same site last September. A unique gold Thracian treasure was discovered in Sveshtari in 2012.