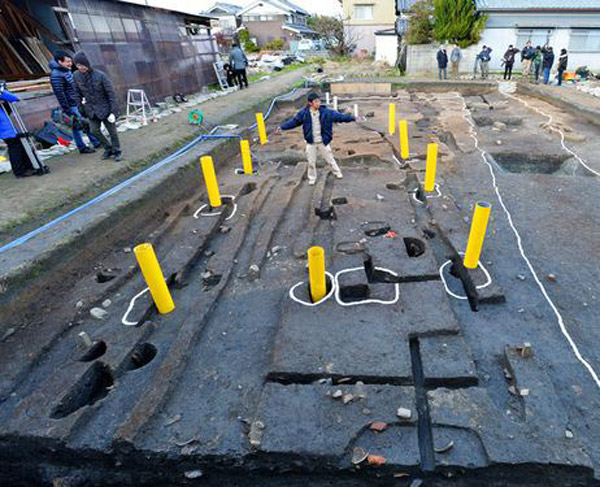 Evidence of a building that might have functioned as a palace for a legendary Japanese shaman queen has been revealed in Makimuku, Nara Prefecture, Japan.

The architectural remains come in the form of foundation, flooring and holes once supporting pillars, and date from the 3rd c. AD. As reported by The Asahi Shinbun’s Kazuto Tsukamoto, “they comprise 10 square-shaped pillar holes, each measuring 40-60 centimeters per side, and are the remnants of a building that likely stretched 3.4 meters from east to west and 6.7 meters from north to south. It sits along the same axial line as the three known building sites from the area, indicating they all date from the same period”.

“Latest finds virtually confirm that several buildings stood in a regular geometry along the central axis of a quadrangular area stretching 150 meters from east to west. That is an extraordinary dimension for third-century artifacts. It now appears ever more likely that the site represents the residential area of the two queens of the Yamatai state, Himiko and her successor, Toyo, who are mentioned in an official chronicle of China.”, says Hironobu Ishino, director of the Hyogo Prefectural Museum of Archaeology, who leads the dig in Makimuku.

The Makimuku archaeological site contains architectuiral remains dating from the 3rd to the early 4th century AD. Back in 2009, excavations had brought to light the remains of the largest 3rd century building ever found in Japan as well as two smaller buildings, sharing the same E/W axis. The newly found building is the easternmost one of them all, situated next to the large one.

Historical evidence on Himiko and the exact location of her state, Yamatai, have been one of the most problematic issues for Japanese historians and archaeologists. The mystery surrounding Yamatai has even penetrated popular culture with the state to make an appearance as a theme in the latest version of videogame Tomb Raider (2013).

Makimuku has already been designated as a historic city by the Japanese government.