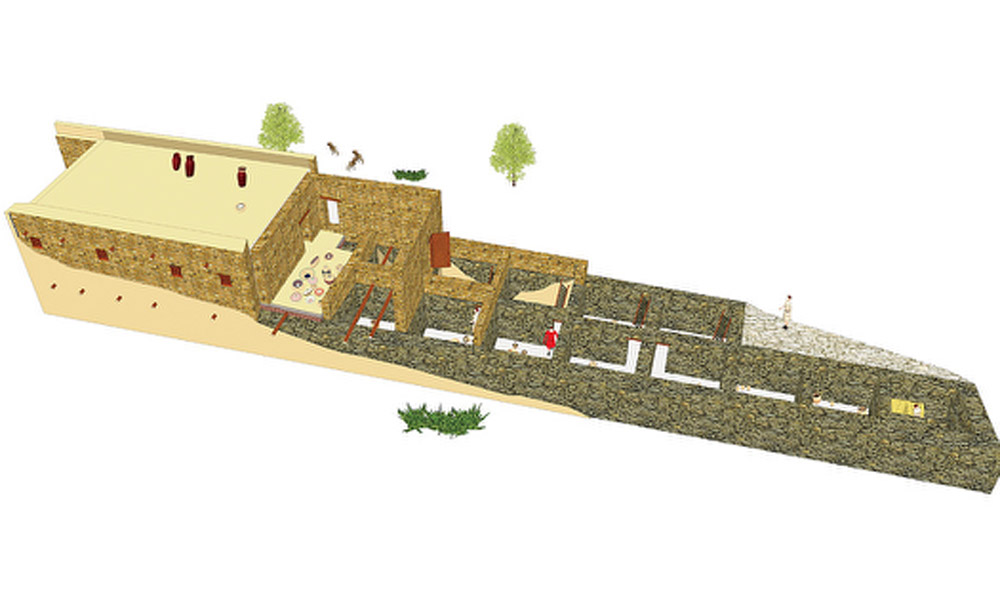 New evidence on the settlement trends followed by the mobile populations known as the Sea Peoples around the end of the Bronze Age in the Mediterranean came to light during the latest excavation season at Tel Abu al-Kharaz, Jordan.

Situated in the Jordan Valley north of the perennial stream of Wadi al-Yabis and approximately 4 km east of the Jordan River, Tel Abu al-Kharaz is excavated by the Swedish Jordan Expedition led by Professor Peter M. Fischer (University of Gothenburg Department of Historical Studies, Ancient History/Classical Archaeology) since 1989. After 16 seasons of excavating -the latest season took place in autumn 2013- the team has revealed a 300 m x 400 m, and 60 m high occupation spread along a large natural hill (top elevation 116 m below sea level).

“We have evidence that culture from present Europe is represented in Tell Abu al-Kharaz. A group of the Sea Peoples of European descent, Philistines, settled down in the city. We have, for instance, found pottery resembling corresponding items from Greece and Cyprus in terms of form and decoration, and also cylindrical loom weights for textile production that could be found in central and south-east Europe around the same time.”, said Peter Fischer in a U. Gothenberg release.

Well-mentioned in records from Egypt and the Levant as a mobile population raiding the coasts of the Mediterranean, destroying cities and bringing down empires, the so called Sea Peoples are defined as a massive maritime movement of migrants out of Southern or Eastern Europe who finally settled in cities along the Mediterranean’s eastern shores -the Levantine coast and Cyprus. While in Egypt they were said to have succumbed to the Pharaohs’ will, inhabiting temple-towns and other settlements found by the king within Egypt’s sphere of power, in the Levant they are primarily represented by the Bible’s Philistines, who got organized into a “pentapolis” (a group of five cities) including Gaza, Ashkelon, Ashdod, Ekron and Gath. And whether there is evidence of Philistine presence elsewhere, it was unknown in what extent they managed or chose to spread eastwards/inlands. Biblical records mentioning the location of Philistines far from their historic homeland along the shores of southern Israel (I Samuel 31) are often seen as a seeming anomaly in the Bible. However, the new finds come to support the opposite!

During the excavations in Tel Abu al-Kharaz, a number of remarkably well-preserved stone structures of defensive character (walls, buildings) containing portable finds produced locally or imported from south-east Europe have been exposed. “What surprises me the most is that we have found so many objects from far away. This shows that people were very mobile already thousands of years ago,” says Dr. Fischer.

A nearly 60-metre long well-preserved building from 1100 BC was discovered in 2010. It was originally built in two levels of which the bottom level is still standing with walls reaching 2.5 meters in height after more than 3,000 years. Within the building’s premices,  containers still filled with various seeds were found.

As reported in BIO News website, the archaeologists have found evidence indicating that Philistines, who lived in the building together with local people around 1100 BC utilized a defense structure from 3000 B.C. in the form of an old city wall by constructing their building on top of it. In this way, they had both easy access to building material and a solid surface to build on.

“One of our conclusions after the excavation is that ‘Jordanian culture’ is clearly a Mediterranean culture even though the country does not border the Mediterranean Sea. One could assume after 16 seasons of excavations that, in principle, the entire occupational sequence of Tell Abu al-Kharaz and the typology of finds would be well established. Nevertheless, the latest four seasons of excavations brought to light new evidence by early Tell el-Yahudiyeh ware on the presence of people at the site in the MB II (18/17th century BCE), the beginning of the Iron Age (12/11th century BCE), and the historical periods following the Iron Age, … and some unique finds which on the one hand are exciting but on the other hand by their very uniqueness present certain problems in finding parallels,” observes Dr. Fischer.