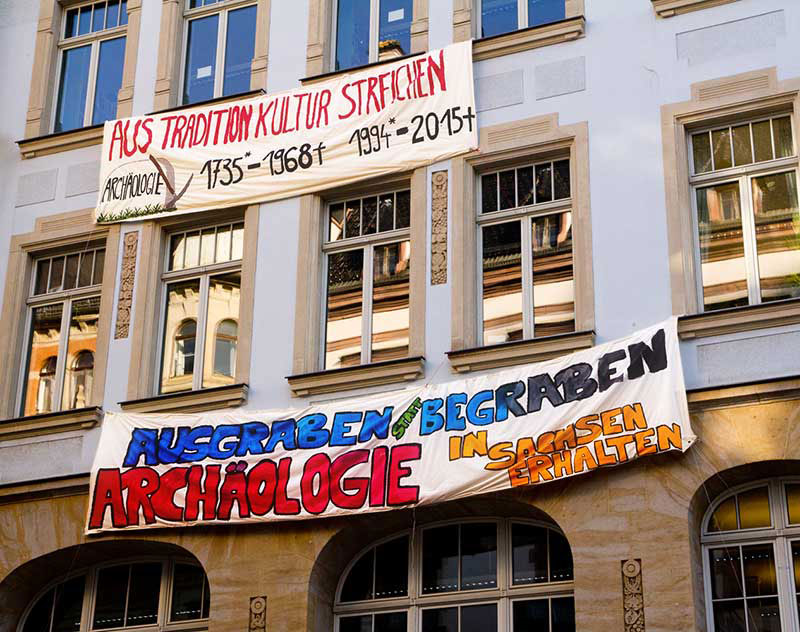 Reacting to the “destructive” decision of the Leipzig University Rectorate to close the Institute of Classical Archaeology of Leipzig University, German archaeologists have launched a petition. The text reads:

“On 21 January 2014 the Rectorate of Leipzig University announced without prior notice that it will close the Institut für Klassische Archäologie. Two reasons were given: 1) the Staatsministerium für Wissenschaft und Kunst of the Freistaat Sachsen will introduce further severe cost-cutting measures in higher education within in the next six years; 2) the Leipzig institute is smaller than the Seminar für Klassische Archäologie at the Martin-Luther-Universität Halle-Wittenberg situated nearby.

The Leipzig Institute of Classical Archaeology

Founded in the 19th century the Leipzig Institut für Klassische Archäologie is one of the oldest and most renowned of its kind in the German-speaking world. It has survived not only several wars but also the difficult period of communism between 1945 and 1989. In the aftermath of the Peaceful Revolution in late 1989, the Leipzig institute and its re-opened Antikenmuseum have established themselves as a new flourishing centre for Classical Archaeology. Esteemed international scholars have regularly contributed to the teaching. All junior scholars from the institute are now holding top positions in the field, such as the President of the German Archaeological Institute in Berlin. In Leipzig, Classical Archaeology has been right at the heart of Classics, is the indispensable ‘Brückenfach’ for disciplines such as Prehistory, Egyptology, Near Eastern Studies, Greek and Latin Philology and Ancient History, and its twin Art History. To take a single example, the most popular and successful major ‘Archaeology of the Ancient World’ taught together by Prehistoric and Classical archaeologists is now doomed to die.

The Collection of Antiquities of Leipzig University

Another jewel of Classical Archaeology at Leipzig is the institute’s distinguished Antikenmuseum. The generous contributions made by dedicated people of Leipzig have significantly supported its spectacular come-back. The museum has been dependent on and has played a vital role in research and teaching. And with its numerous well attended exhibitions the museum has served as a vital academic stage to the public. Can it be true that the endorsement of Classical Archaeology and the Antikenmuseum so enthusiastically announced and subsidised by Leipzig University in 1993 has now turned out to be a white elephant, a political and financial disaster of higher education in the Freistaat Sachsen? Let us be clear, the closing of the Leipzig Institut für Klassische Archäologie will unavoidably mean the demise of the Antikenmuseum and it will gravely damage the ‘Altertumswissenschaften’ in Leipzig and beyond.

As the Leipzig decision is so destructive and ill founded, the signatories and the almost 1000 members of the Deutscher Archäologen-Verband urge the Staatsminister für Wissenschaft und Kunst of the Freistaat Sachsen und the Rectorate at Leipzig University in the strongest possible terms to revoke their disastrous decision to ax the Institut für Klassische Archäologie in Leipzig”.

For further information und to sign the petition visit change.org