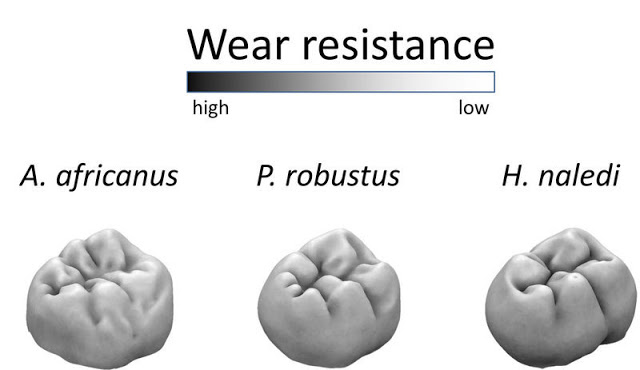 Homo naledi’s relatively taller and more wear resistant molars enabled it to have a much more abrasive diet than other South African hominins. This is the result of a recent study published in the Journal of Human Evolution by researchers from the Max Planck Institute for Evolutionary Anthropology in Leipzig, the University of Durham in the United Kingdom and the University of Arkansas in the United States. The researchers conclude that Homo naledi may have eaten a much grittier diet than other South African hominins.

The researchers found no difference in sharpness or complexity between the molars of Homo naledi and other South African hominins, implying they ate foods with similar mechanical properties. However, Homo naledi did have relatively taller, more wear resistant molars than other South African hominins, suggesting its teeth were adapted to consume foods that wore its teeth faster. “We think that Homo naledi must have been eating foods covered in dust or grit, or possibly ate plants containing lots of defensive silica particles, known as phytoliths,” said Michael Berthaume of the Max Planck Institute of Evolutionary Anthropology and Durham University, one of the authors of the study.

Plants produce phytoliths or ‘plant stones’ to try and prevent animals from eating too much of them. Animals such as grass-eating antelopes living in dry, and hence gritty, environments have high crowned molars to enable them to eat diets heavy in plant stones and grit without wearing their teeth away too much.

The findings of the present study suggest that Homo naledi may have evolved a similar strategy, and hence was eating a different diet to that of other South African hominins. “This lends support to the idea that Homo naledi, with its mixture of traits from earlier and later hominins, was ecologically distinct to other South African hominins,” Berthaume added.