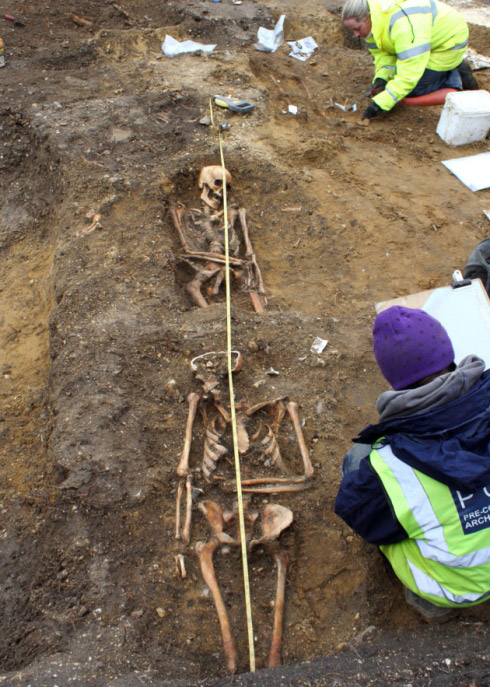 Nine burials in which the bodies were accompanied by plenty of grave goods dating to the 6th century AD were discovered during a rescue excavation at a car park in the Buckinghamshire village of Haddenham, near Oxford ,UK, by the specialists of Pre-Construct Archaeology.

The dig took place over a small site next to which developers are going to proceed with work on a new house. The bodies discovered are believed to date back to the early Saxon period and included both men and women, young and old, and in many cases adorned with precious objects. A man was found lying on a decorative shield and bearing a knofe and a spear, while a woman was discovered still wearing a beaded necklace (covering her neck and upper torso) and a belt made with copper and iron fittings.  All the bodies were found aligned east to west -a typically Christian trait- although the abundance of grave goods and other finds in their burials suggests that they were pagan.

Jonathan House, of Pre-Construct Archaeology, said: “Projects such as these prove how even the smallest developments can yield a wealth of archaeological information and details not only of how people lived but also of their treatment toward the dead more than 1,400 years ago.This is especially important during those periods, such as the early Saxon era, which have left little or no historical data.”

Still, the site is not new to researchers. Back in 1990, a dig nearby yielded three bodies alonside a shield and a dagger.