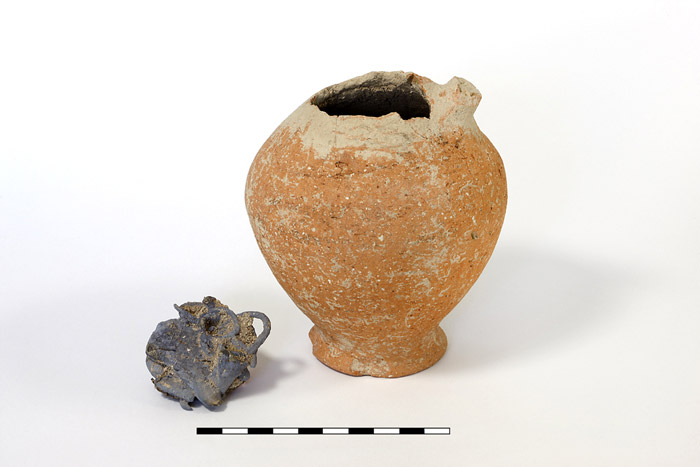 A Silver Treasure and a Mystery Flee

Five silver hoop earrings were found after the close examination of what appeared to be a silver ball, which was found in a jug, during excavations in Tell Abil el-Qameh, an abandoned Palestinian village at the northernmost point of the modern State of Israel, on the border with Lebanon. Dating 3,200 years ago, the jug also contailed other silver artefacts, which are seen as particularly important as it is though to have represented a kind of currency made long before minted currency was invented.

“We found it in a small jug leaning against a wall, apparently on a dirt floor. It didn’t seem to have been deliberately hidden in a niche or any other hidey-hole.”, say on the hoard archaeologists Robert Mullins, Nava Panitz-Cohen and Ruhama Bonfil in a report to the website LiveScience. The discovery took place last summer in Tell Abil el-Qameh, a site identified to the ancient biblical city of Abel Beth Maacah, within a building which might have been a tower overlooking the Huleh valley.

As the jug was opened, the silver was bunched together in what looked like a big ball. After conservator Mimi Lavi, of the Hebrew University of Jerusalem’s Institute of Archaeology, cleaned the ancient silver, the team saw that it actually consisted of five hoop earrings. The jug also contained an enigmatic silver object similar in shape to a twisted knot, as well as several ingots or scrap pieces of silver that would have been used for monetary transactions. According to researchers, the pieces of silver would have been used for trade as back then minted coins had not been invented.

Why the treasure was not retrieved, and apparently not even hidden, is a mystery. “Perhaps the family needed to leave their home suddenly and hoped to return to retrieve this jug and its contents, but were unable to,” the researchers said. Afterward, “this area was covered by accumulating debris and earth over the centuries, [and] no one knew that the treasure was there,” researchers say.

And, according to Biblical and archaeological evidence on Abel Beth Maacah, there would be indeed many chances for a family to leave the city.

According to scripture, a Benjaminite named Sheba ben Bichri, who was rebelling against King David, took refuge in the city. A man named Joab pursued him there and laid siege. A “wise woman,” as the text calls her, protested this action, saying Abel Beth Maacah is part of Israel. The siege ended when the city’s inhabitants killed the rebel and threw his head from the wall.

Still, the biblical incident took place two centuries after the jug was abandoned. But even back then, 3,200 years ago, numerous cities in close proximity to Abel Beth Maacah had suffered by the raids of the Sea Peoples, who ended up settling in areas of modern day Israel. And, while there is not any archaeological evidence that Sea People groups reached Abel Beth Maacah itself, it is highly impossible that their coming in Palestine did not affect its historical course.

As stated in Live Science, “It seems most likely that Canaanites were ‘in charge’ — or at least were the main inhabitants” — of Abel Beth Maacah, the researchers said. If the city did suffer any destruction, it could have been abandoned for a time and perhaps repopulated by returning Canaanites or by Israelite tribes. “Hopefully, next season, we will be closer to some answers,” the researchers said of their forthcoming dig at the site.