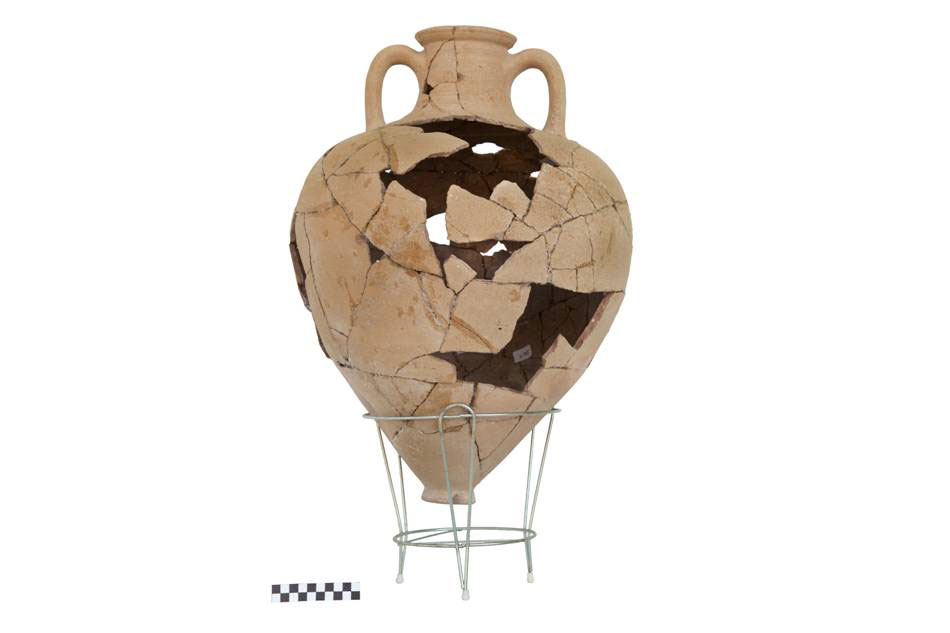 Conservation and study of the excavational material from the ancient settlement

“In July 2013 the excavation team of the Aristotle University of Thessaloniki has completed twenty years of continuous presence at Karabournaki. The archaeological data and the material revealed during the excavations have proved to be inversely proportional to the limited extent of the surveys.

“Last year the pottery from the semi-subterranean beehive shaped pits (yposkapta) in an older trench have been reconstructed and investigated. The pottery shows a big variety of forms and is dated to the Archaic period (2nd half of the 7th and 1st half of the 6th century BC). Local domestic utensils and some imported examples were found in the debris of the yposkapta. The local production includes “egg shelled” (ookelypha), grey clay pots and cooking vessels, oinochoe, mortars and pithoi. Among the imported vessels Ionian kylikes, a fruit stand, a cauldron from Eastern Greece and some Corinthian sherds were found. Also interesting are the trade amphorae from Attica (“SOS” type), Chios, Samos, Klazomenai and Corinth.

“The main type found in the debris of the other trench investigated was the pointed trade amphora, some of which were almost completely reconstructed. Big fragments of at least ten amphorae were located. The main types include one from Samos, some of the Southeastern Aegean (of the Mendes type) and the Northeastern Aegean. These vessels are most likely dated to the end of the 6th, beginning of the 5th century BC. In other words they are of the Late Archaic period.

“We believe that the work of the team in Karabournaki will continue in the next years stressing our university’s contribution to the research and enhancement of one of the most important sites of archaeological and historical memory, as well as to the development of a park serving as a green lung for the broader area of Thessaloniki.”

The archaeologists will present the results of the 2013 excavational season at Karabournaki on Friday, March 14, 2014, at 1.00 p.m., within the framework of the conference about the Archaeological Work in Macedonia and Thrace. Their paper is titled “Karabournaki 2013: Conservation and study of the excavational material from the ancient settlement.”