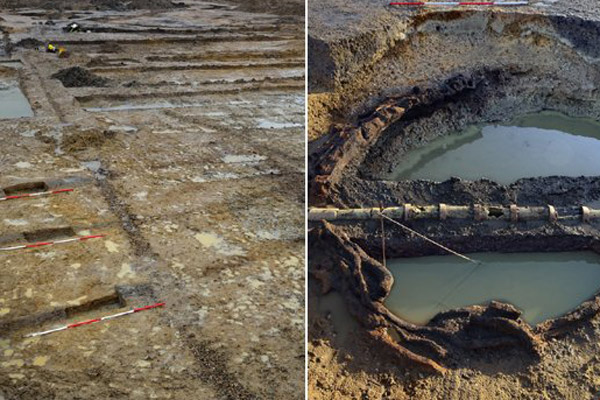 Found near Cambridge and dates from the Roman Period

Planting beds and pit wells probably representing evidence of what used to be Britain’s earliest irrigation system were unearthed at the North West Cambridge site, UK.

According to chief excavator Chris Evans (Cambridge University archaeological unit) it was an “unparalleled discovery” and “effectively the first irrigation system we’ve seen”.

So far the site has given evidence of settlements and habitation dating back to the later Neolithic period (2800 BC) and spanning up to WWII! However, the new finds are considered as “new territory” by the team excavating the site.

“Our findings have unearthed zebra-like stripes of Roman planting beds that are encircled on their higher northern side by more deep pit wells. The gully-defined planting beds were closely set and were probably grapevines or possibly asparagus.”, explains Evans, adding that during dry spells water would have been poured from the wells into the ditches to irrigate crops.

“I’m not aware of an irrigation system of this kind before,” he said, since evidence of gardens and wells knowing so far does not demonstrate the organizational sophistication seen through the new finds.

“It points to the sophisticated knowledge of hydrology and the introduction of horticulture the Romans had.”, Evans explains.