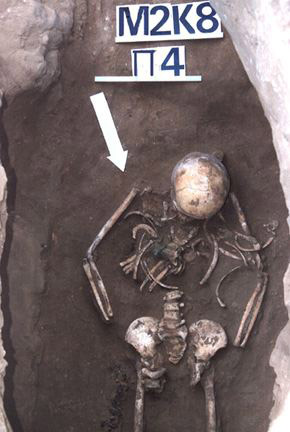 The kurgans of Pokrovka

Fierce fearless female warriors and keen riders. This is how the Amazons are portrayed in Greek mythology and since the earliest written reference to them (by Homer)  they have captured human imagination like little other themes. Homer calls them “antianeirai” (like men), hinting through his stories that they were so fierce in battle that it was an honour for any warrior to kill them. During the rise of Athenian Hegemony in the Archaic period, the Amazons, perceived as group of women living differently to what a woman’s role was supposed to include and led by a woman monarch, were used as a theme opposing to what the Athenians thought as order: democracy and men as society’s leaders. Iconography added up to the myth, using the “Amazonomachy” (Amazon Battle) theme very often.

During the 5th century BC, Herodotus attempted to give a historic allure to the Amazon subject by giving information about their country, their political and social history, their customs and main events characterizing their history. He located their country somewhere in the Black Sea, while he wrote about the Amazons’ coupling with teh Scythians and the birth of a nomad tribe trekking the steppes under the name of Sauromatians. “The women of the Sauromatae have continued from that day to the present to observe their ancient customs, frequently hunting on horseback with their husbands… in war taking the field and wearing the very same dress as the men…Their marriage law lays it down, that no girl shall wed until she has killed a man in battle.”

Still, since recently, the amount of truth hidden behind Herodotus’ accounts was unknown. However, during the early 1990s, a joint U.S.-Russian team of archaeologists made an extraordinary discovery while excavating 2,000-year-old burial mounds—known as kurgans—outside Pokrovka, a remote Russian outpost in the southern Ural Steppes near the Kazakhstan border. Over 150 graves were found, apparently belonging to the Sauromatians and their descendants, the Sarmatians. Among the tombs, several graves of warrior women who had been buried with their weapons were located. One young female, bowlegged from constant riding, lay with an iron dagger on her left side and a quiver containing 40 bronze-tipped arrows on her right. The skeleton of another female still had a bent arrowhead embedded in the cavity. On average, the weapon-bearing females measured 5 feet 6 inches, making them preternaturally tall for their time, while their skeletons still bore traces of wounds, probably acquired in battle.

With locating a tribe where women functioned as warriors, it seems that the Amazons were actually no myth. In fact, their story was far more fascinating than the Greeks had written…