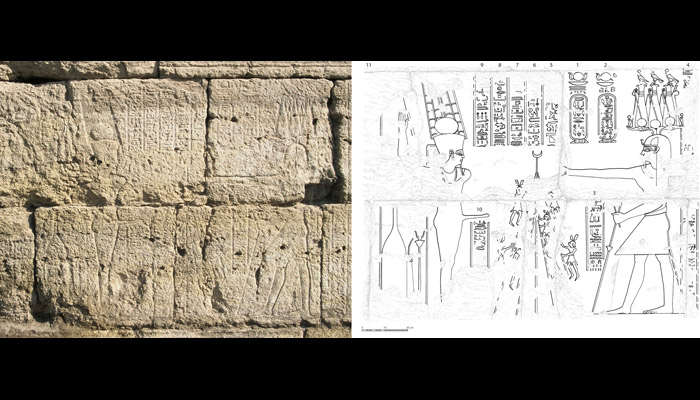 I Claudius, the Pharaoh

On the western exterior wall of the temple of Isis at Shanhur, Egypt, a Pharaoh is depicted raising a pole of a ceremonial tent in the framework of a ritual associated with the fertility god Min. Still, the pharaoh is not Egyptian. He is Roman, and in fact, the most famous “outsider” in history, Emperor Claudius (41-54 AD).

The carving was uncovered in 2001 during research in the temple located on the east bank of the Nile River about 12 miles (20 kilometers) north of Luxor and built when Egypt was already under Roman rule. It was one out of 36 scenes covering each of the temple’s eastern and western exterior walls. Protected for millennia by a layer of dirt, is one of the best preserved. Having also being recorded during an epigraphic survey in 2010, the scene has been now published in Zeitschrift für ägyptische Sprache und Altertumskunde by Martina Minas-Nerpel, a Reader at Swansea University in the United Kingdom, and Marleen De Meyer, a postdoctoral researcher at KU Leuven University in Belgium. Careful line drawings of the scene were done by Troy Sagrillo, a senior lecturer at Swansea University.

In the scene, Claudius is seen erecting a pole topped with a lunar crescent which was to form part of a cult chapel dedicated to god Min, who is depicted opposit him in his usual form as an ithyphallic mummy sporting a double feather and solar disc crown. Claudius himself, wearing a composite nemes crown topped with several symbolic items (introduced from the Ptolemys onwards) and a pharaonic  highly stylized kilt, is described as the “Son of Ra, Lord of the Crowns,” and as “King of Upper and Lower Egypt, Lord of the Two Lands”. Just like any Pharaoh. But, unlike most Pharaohs, Claudius had probably never set foot in Egypt.

“Although we know that Claudius, as most Roman emperors, never visited Egypt, his rule over the land at the Nile and the desert regions was legitimized through cultic means,” Minas-Nerpel and De Meyer wrote in the journal article. “By decorating the exterior temple wall with this ritual, Claudius theoretically received Min’s characteristics and thus his ability to rule over Egypt.”

After Cleopatra’s defeat and Egypt’s fall under Roam rule, little is believed to had been changed in Egypt regarding culture and its evolution. This is why Ptolemaic and Roman rule are often perceived as belonging to a single period, termed Greco-Roman. It is known that during the Roman period, the Egyptian priests depicted the Roman emperors as pharaohs up until the 4th century A.D. The Roman emperors allowed, or even encouraged, these depictions in Egyptian temples in order to keep Egypt — which was an important Roman province — stable. An expression of this practice is the iconography of Claudius in the Shanhur temple: fertility and victorious power, both of which were important for legitimizing the rule of an absent Roman emperor who wanted to control Egypt, Minas-Nerpel and De Meyer wrote.