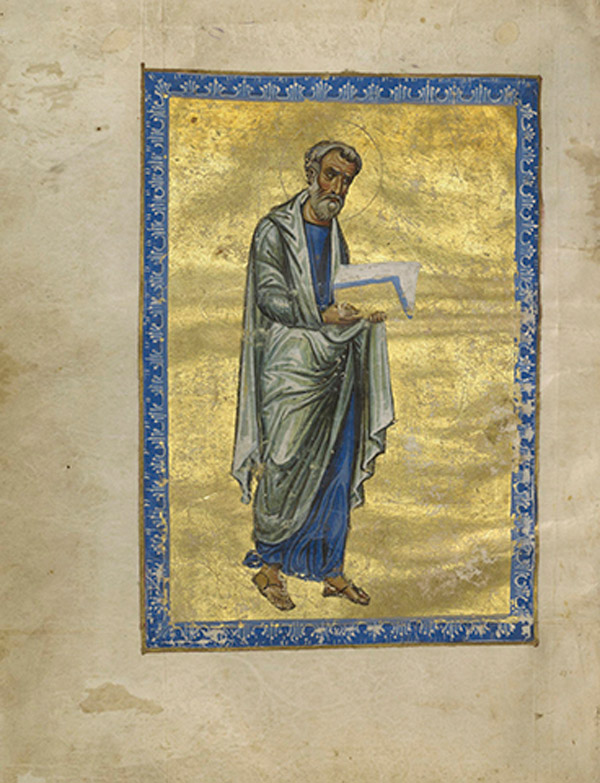 The manuscript was acquired by the Getty Museum in 1983 as part of a large, well-documented collection. Recent research on the object by the Hellenic Ministry of Culture and Sports, which was conducted in close collaboration with the Getty, suggested that the New Testament had not been legally transferred from the Monastery of Dionysiou. This was confirmed by a recently obtained 1960 monastery record indicating that the book had been illegally removed. The report of its disappearance had never been made public, nor had information about the theft been made available to the Getty, to law enforcement, or to any databases of stolen art.

“Over the past six weeks, the Getty Museum has worked cooperatively with the Hellenic Ministry of Culture and Sports to understand the recent history of this manuscript, and to resolve the matter of its rightful ownership in a timely fashion,” said Timothy Potts, director of the J. Paul Getty Museum. “Based on new information that came to light through this process, the Museum decided that the right course of action was to return the manuscript to the Holy Monastery of Dionysiou from which it disappeared over 50 years ago. The Monastery’s report from 1960, which only recently became available to us, was crucial in reaching this decision.”

“This illuminated New Testament, which was copied in 1133 by the scribe Theoktistos and can be stylistically associated with court art produced in Constantinople, is a masterpiece of Middle Byzantine art. We applaud the Getty for their responsiveness to this matter. Their decision to return this precious Byzantine manuscript honors the spirit of our 2011 Framework for Cultural Cooperation,” explained Panos Panagiotopoulos, Greek Minister of Culture and Sports. “The decision also clearly demonstrates the respect the Getty Museum has for Greek cultural heritage and encourages us to continue to build and strengthen our collaborative relationship for the future.”

The manuscript is currently on view at the Getty Center through June 22 in the exhibition Heaven and Earth: Byzantine Illumination at the Cultural Crossroads alongside several loans from Greece. It will be returned to Greece once the exhibition has closed together with the Greek loans.

Since its acquisition, the manuscript has appeared in over 20 publications and its images have been available on the Getty website since 1998. It has been featured in 14 exhibitions at the Getty Museum, and was loaned to the Metropolitan Museum of Art in 1997 for its landmark exhibition, The Glory of Byzantium.