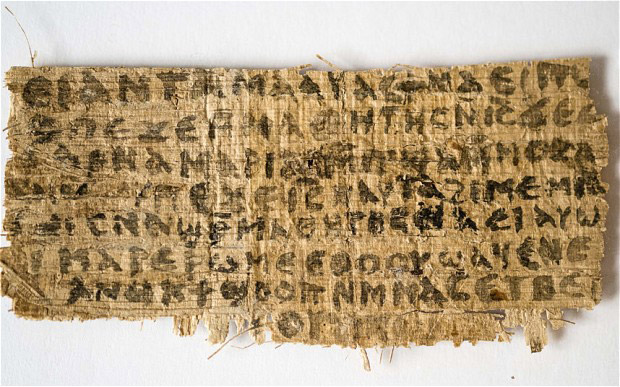 Jesus’ Wife Papyrus Not A Forgery

As demonstated through teh Harvard Theological Review

An Egypt originating papyrus fragment bearing Coptic text where Jesus is reported as mentioning his “wife” has been demostrated as being genuine. This is what researchers from Harvard, Columbia University and MIT claim, through an article published in the Harvard Theological Review.

The text, mentioning “Jesus said to them, my wife’’, had been an issue of controversy just after its presentation by Harvard scholar Karen King at a conference in Rome in September 2012. While King, who assisted in the texts’s translation never asserted the text was proof that Jesus was married, the document was swiftly denounced as a fake by both Ms King’s academic peers and the Vatican. Even during the conference, her contribution was not reported by either the Vatican newspaper or the Vatican radio.

Now, two years later, Prof. King publishes the papurus fragment in an article bearing a piece where scientific tests on its authenticity are mentioned. According to the relevant section, scientists carried out tests on the materials (papyrus, ink) as well as the inscription (handwriting, grammar), proving finally that the papurus fragment dates between the 6th and the 9th century AD. “None of the testing has produced any evidence that the fragment is a modern fabrication or forgery”, researchers conclude.

As for the content, King suggests it is probably a reference to issues of family and marriage faced by Christians of the time.