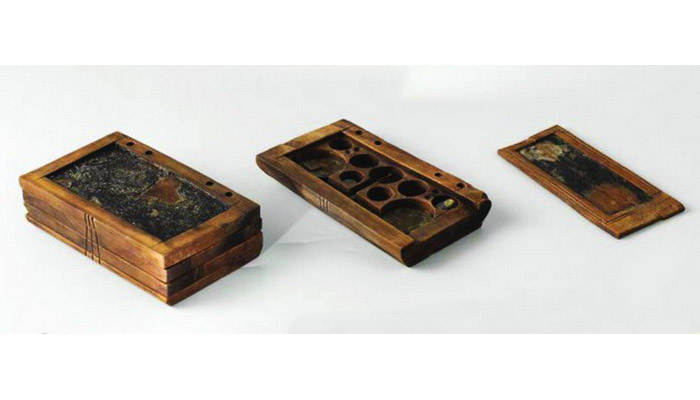 A notebook from Byzantium found at Yenikapi

A new array of finds, including a pocket size notebook which had to be common during Byzantine times have been discovered in one of the ships that came to light at the unique site of Yenikapi, Istanbul, now famous for the unprecedented number of well preserved Byzantine ships and their cargo found there.

According to a description by project team member Associate Professor Ufuk Kocabaş, the notebook was “made of wood and can be opened like a notebook. It has a few pages and you can take notes using wax. Also, when you draw its sliding part, there are small weights used as an assay balance”.

The notebook dates back to the 9th c. AD, as is the ship where it was found. Based on its cargo, still loaded in it in the form of amphorae, the vessel was to sail to the Black Sea as it was engaged in trading from Crimea to Chersonesos.

The ship is preserved in a percentage of 60%, where there is also info on the way the missing part had been made. Due to the vessel’s good condition, the project team plans to build a replica, named Yenikapi 12, which is to float by the middle of 2015.

Overall, Yenikapi, known as Theodosios port during the Byzantine times, has given the remains of 37 sunken ships, loaded with pottery, objects of use but also organic products. Regarding animal remains found on the site, specialist Professor Vedat Onar states that Yenikapi has so far given the largest colection of horse remains from Byzantium ever found, presenting data supporting that the people of this period were likely eating horses. “Horses were killed for consumption, which we are seeing for the first time in these excavations. This type of meat was not much preferred in the Roman-era, but we see it in the Byzantine times. It is hard to see a horse older than 10-years-old. Their life was short. We have found remains from 57 kinds of animals. There was even dolphin and turtle hunting,” he said.