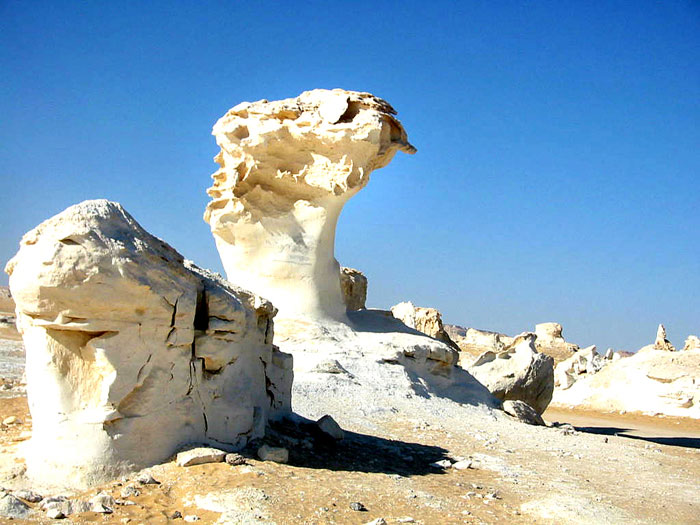 Discovering the artists of the Eastern Sahara

A journey across a desert track surrounded by beautiful sand dunes

The identification of rock art found in Farafra as Neolithic adds substance to the argument that Egypt drew on cultural influences from Africa as well as the Near East. At a talk given yesterday (19 May, 2014) at the University of Cambridge archaeologist Dr Giulio Lucarini talked about his fieldwork in the Egyptian Western Desert and showed images of newly-identified Neolithic drawings to a public audience for the first time.

Recently discovered rock art on the walls of a cave in the Egyptian Western Desert has been provisionally dated by a Cambridge University archaeologist as between 6,000 and 7,000 years old, created at least 1,000 years before the building of the pyramids. The drawings add weight to the argument that Egyptian culture drew on cultural influences from Africa and not only from the Near East.

Spotted by a tourist to Wadi el Obeiyid, north of Farafra Oasis, drawings of a giraffe, a bovid (cow-like mammal) and two boats, plus the outline of a human hand, were examined last month by Dr Giulio Lucarini who co-leads a team of archaeologists looking at the pathways, and timings, by which domestic animals and plants from the Levant arrived in Egypt. The engravings are thought to have been discovered in 2010. The onset of revolution in Egypt meant that they were not investigated for some time.

Based at the McDonald Institute for Archaeological Research at Cambridge University, Lucarini is an expert in the transition from foraging to farming in North Africa. With Professor Barbara Barich of ISMEO in Rome, he is co-director of a project (the Archaeological Mission in the Farafra Oasis) that has been studying the archaeology of this region of the Eastern Sahara since the late 1980s.

In his talk about his work as part of the Pint of Science series taking place in pubs in eight cities across the UK Lucarini highlighted these artworks and others.

The site of the newly-identified images – which are engraved into the white chalk surface – has been dubbed the Boats Arch, a reference to the shape of the shallow cave.The location is 600 km southwest of Cairo and 50 km into the desert from the nearest paved road at Farafra – a journey across a desert track surrounded by beautiful sand dunes.

Boats Arch is about 3 km from another site – known as Wadi el Obeiyid Cave – where examples of rock art were first examined by Barich in 1995. The art in this first cave features representations of engraved boats and animals as well as painted hand stencils. “What’s really exciting is that these drawings are among the earliest artistic evidence of the people who lived in the Farafra and possibly in the whole Eastern Sahara,” said Lucarini.

Rock art is notoriously tricky to date. “The marked similarity in style seen in the bovid, which is probably an oryx, and giraffe in the Boats Arch and the animals in Wadi Obeiyid Cave, dated to around 6000/5500 BC, suggests a similar period for the two sites. In style the boat images correlate to those found on decorated pots from Predynastic sites along the Nile Valley, dated around 3500 BC. But we can presume from the regrowth of calcite crystals along their engravings, possible under humid conditions, that they could be even older,” said Lucarini.

“The location is another important for another aspect of the find,” said Lucarini. “Representations of boats in the Egyptian Western Desert are rare in comparison to those in the Eastern Desert, a region which connects the Nile valley with the Red Sea. They could have been created by people who were moving across very long distances and could have visited the sea or the Nile Valley. In the sites we investigated we did not find any faunal remains belonging to giraffe so, like the images of boats, the drawing of the giraffe may represent not a local element but something seen somewhere else and considered exotic.”

The Archaeological Mission in the Farafra Oasis is building a picture of the transition from foraging societies to communities based on the exploitation of domestic species. Today the Wadi el Obeiyid landscape is arid and characterised by white limestone formations and high sand dunes, but thousands of years ago the region was a savannah-like environment with grasslands offering subsistence to human groups and animals.

“Since 1987, we have had permission from the Egyptian Ministry of State for Antiquities to survey some 10,000 square kilometres of desert. Our starting point in the research is the use of satellite images which enable us to identify past sources of water and therefore where settlements may have been located. We then carry out detailed walking surveys of these areas to try to locate the presence of old seasonal lacustrine basins, shallow pools, around which people used to live,” said Lucarini.

Over the past years Lucarini and team have been studying the remains of Sheikh el Obeiyid village, a slab structure site with stone circles that were once the foundations of huts made with animal skin and vegetation. “We’ve also found tumuli containing corridor structures. They weren’t dwellings, burials or storage spaces. They may have had a religious or symbolic function,” he said.

“In the past archaeologists have tended to see Africa as somehow lagging ‘behind’ Europe and the Near East, but our work shows that people living in the Eastern Sahara had a significant and developed culture – which fed into the development of the Pharaonic civilization and beyond.”

Lucarini is keen to develop training programmes for Egyptian Antiquities inspectors, teachers and school children in order to share the team’s research into the region’s archaeological and environmental significance and underline the importance of preserving the cultural heritage, which is, at present, vulnerable to damage.