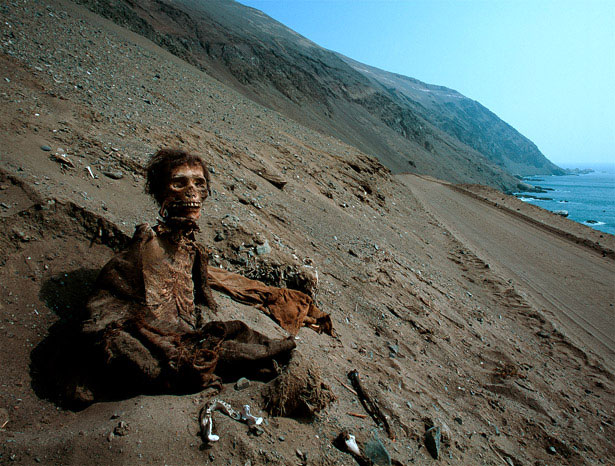 Probably belongs to the Chinchorro culture

A group of students have discovered a 7,000-year-old mummy during an archaeology field trip to Morro de Arica in northern Chile, a high cliff at the end of a coastal mountain range.

The group of students from the American school in Arica were excavating an area at the foot of El Morro, as part of an archaeology workshop when they made the discovery, according to Noticerios Televisa. The mummy was probably made visible after local landslides caused by the powerful earthquake that struck the region in April.

The mummy is believed to be part of the coastal Chinchorro culture from what is now northern Chile and southern Peru.

The Chinchorro people, an ancient Pacific coast culture, began immortalizing their dead more than two thousand years before the Egyptians did. The Chinchorro mummies are therefore the oldest examples of artificially mummified human remains. The earliest radiocarbon date obtained for a Chinchorro mummy, a child from a site in the Camarones Valley about 60 miles south of Arica, is 5050 B.C. During the next 3,500 years Chinchorro mummification evolved through three distinct styles—the Black Mummy Technique, the Red Mummy Technique and the Mud coat—before the practice died out.

Chinchorro mummies were elaborately prepared by removing the internal organs and replacing them with vegetable fibers or animal hair. In some cases anembalmer would remove the skin and flesh from the dead body and replace them with clay. Shell midden and bone chemistry suggest that 90% of their diet wasseafood. Many ancient cultures of fisherfolk existed, tucked away in the arid river valleys of the Andes, but the Chinchorro made themselves unique by their dedicated preservation of the dead.

While ancient Egyptians and many cultures throughout the world focused on preserving the dead elite, the Chinchorro tradition performed mummification on all members of their society. The decision of egalitarian preservation is proven in the mummification of the often burdensome members of society (meaning those who could not contribute to the welfare of others; the elderly, children, infants and miscarried fetuses). In fact, it is often the case that children and babies received the most elaborate mummification treatments.