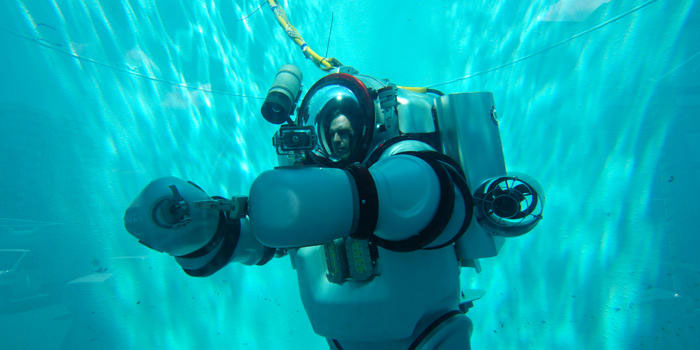 Marine archaeologists will use a robotic diving suit

Marine archeologists with the Hellenic Ministry of Culture research program (with support from the Woods Hole Oceanographic Institution) are planning to explore the ancient Greek Antikythera wreck in the Aegean Sea, using a robotic diving suit developed by Nuytco Research — originally for use in helping workers in New York’s water treatment facilities.

Known as the exosuit, this wearable submarine allows a diver to descend to 1000 feet for hours at a time without need for decompressing upon returning to the surface.

The iron-man looking exosuit has voice, video, and data links; articulated joints for free movement; an umbilical cable to supply it with power for its thrusters. In the event of an emergency, the suit has backup batteries and systems to maintain life support—if necessary, the four man crew up top can take over control of the suit to bring the diver out of harm’s way. It also has 1.6 horsepower thrusters that are activated by the “pilot” via pads inside the boots. It’s made of mostly aluminum, and weighs 530 pounds. The hands are claw-like, which has meant many hours of training in pools for the research team.

The team plans to run a test of the suit this summer off the coast of Rhodes island, at a site called the Canyons. If all goes well, the team will proceed with the exploration of the Antikythera shipwreck.