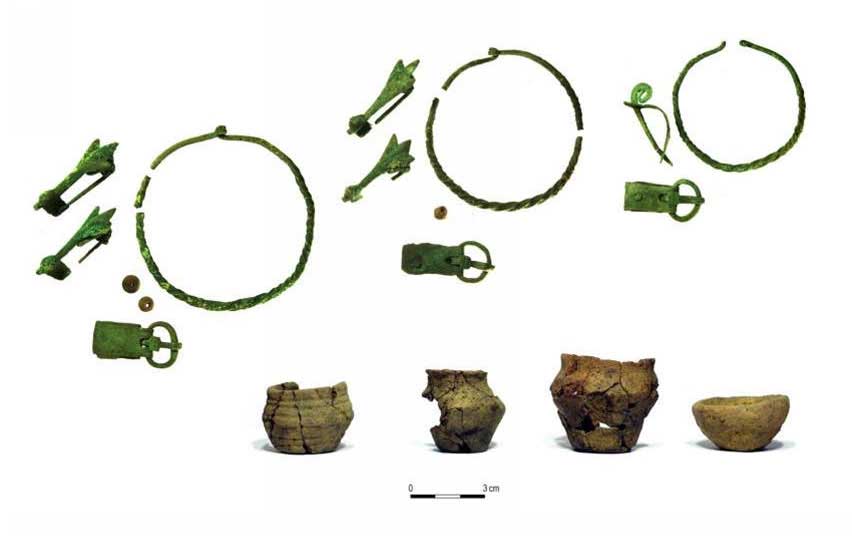 By the Institute of Archaeology, University of Warsaw

Dozens of Migration Period cremation graves have been unearthed by scientists from the Institute of Archaeology, University of Warsaw in Łężany (Northeastern Poland).

The burial ground was discovered accidentally in autumn 2012 during forestry work. The first excavations started in 2013. The necropolis consists of flat, single graves. All the dead were cremated, and their ashes put directly in the ground directly in burrows or in earthen vessels, urns. Archaeologists have also located small clusters of human bones deposited in pure sand.

“A large number of graves and the unique nature of many discoveries shed a new light on the cultural image of the region during the Roman and Migration times,” explained Agnieszka Jaremek of the Institute of Archaeology, University of Warsaw.

“Most of the graves we found contained ornaments, mainly metal clasps, bracelets, necklaces. Also preserved are parts of the outfit – buckles, rivets and fittings. In several burials the deceased were accompanied by miniature vessels,” said Jaremek.

The objects are made mainly of bronze, but iron and silver artifacts were also found. Unique is the discovery of four cicada fibulae in one grave. The objects were used to fasten garments, much like today’s buttons. At the same time, they were spectacular ornaments.

“So far from Baltic cultural circle we had known only three of those unique ornaments coming from the Black Sea, resembling the shape of insects – cicadas,” explains the archaeologist.

Excavations in Łężany are part of a broader research project of Warsaw archaeologists, carried out since 2011 to comprehensively and systematically recognise and reconstruct cultural heritage of the micro-region of lakes Widryńskie and Legińskie. The research is coordinated by the Foundation Dajna. The expedition management consists of employees of the foundation, the Institute of Archaeology UW, University of Warmia and Mazury and Academic Diving Club Sea Horse. The field team consisting of dozens of people includes IA UW students and graduates and volunteers.

The Migration Period, also known as the period  of Barbarian Invasions or Völkerwanderung (wandering of the peoples in German), was a period of intensified human migration that occurred roughly between AD 360 to 800 across Europe, marking the transition from Late Antiquity to the Early Middle Ages.

These movements were catalysed by profound changes within both the Roman Empire and the so-called ‘Barbarian frontier’ as well as climatic changes. Migrating peoples during this period included the Huns, Goths, Vandals, Bulgars, Alans, Suebi, Frisians, and Franks, among other Germanic and Slavic tribes.

This year’s research in Łężanach will be carried out in July and August.