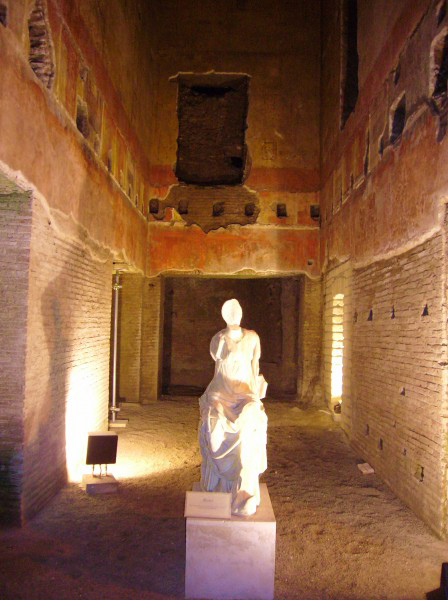 “This fantastic place, one of the symbols of ancient Rome, could become one of the biggest site attractions in the world,” Culture Minister Dario Franceschini told journalists as he showed them around the 16,000 square meter underground complex.

The palace, which has remained closed for visitors during the last decade, sits beneath a park whose mature trees have roots in the palace’s vaulted roof. Water from the heavy layer of soil seeps into the bricks and damages the frescoes. Archaeologists from Italy’s cultural heritage ministry have suggested removing the trees and tons of the soil, in order to construct a new, lighter garden designed to protect the ancient structure. Teodora Filippi, director of the Golden House, said the four-year project would be dedicated in large part to remodelling the gardens on top of complex in order to stop water damage.

Nero’s Golden House (the Domus Aurea) in Rome was a sumptuous palace complex which played host to the wild parties of one of Rome’s most notorious emperors. Besides using the finest marble and decoration such as fine wall-painting and gilded colonnades, the building was also a technical marvel with soaring domes, revolving ceilings, ornamental fountains and even waterfalls running down the walls.

Following the devastating fire of 64 CE which had destroyed large areas of the Aventine and Palatine hills, Nero decided to take the opportunity to build a huge new palace. To have enough space for the project the emperor – already unpopular due to accusations of a slow response to the fire and even possibly having started it – seized large areas of land owned by aristocrats and even carved into the Oppian hillside in the building’s rear. For the construction of the palace Nero turned to the architect Severus and the engineer Celer, already celebrated as masters of grand architecture, whilst for the interior decoration and wall-painting he turned to Famulus whose work would be studied centuries later by Renaissance artists. When the whole magnificent project was finally finished Nero declared with satisfaction: ‘Now I can begin to live like a human being’.

“The state is ready to contribute, I hope that a big company will join the project, ” Franceschini said, adding that he was appealing to both foreign and Italian businesses.

“This is an opportunity for a big company to sponsor an extraordinary project, which will capture the world’s attention. It would be scandalous if no one comes forward,” Franceschini told The Telegraph.

The state is offering a 65-percent tax reduction to entice private companies to help invest in the restoration of the eternal city’s public monuments, Franceschini said.

The government has already persuaded the private sector to help renovate other iconic landmarks. Luxury jeweller Bulgari announced earlier this year that it would help renovate the city’s famous Spanish Steps, while shoemaker Tod’s is financing works at the Colosseum and fashion house Fendi is sponsoring the refurbishment of the Trevi Fountain.