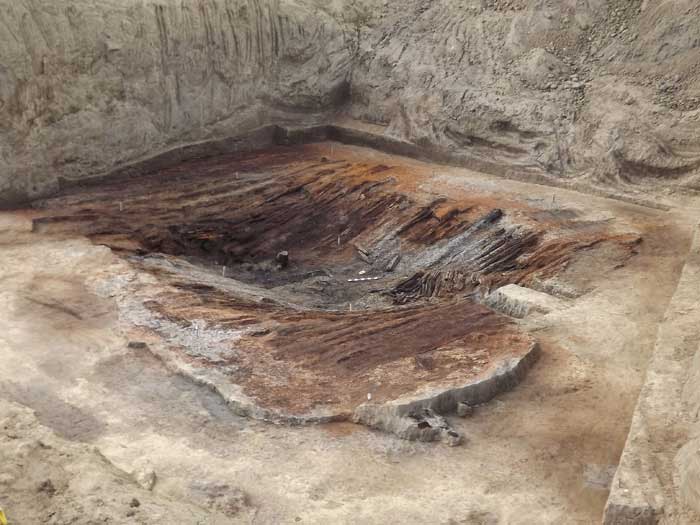 At the municipality of Lagodekhi in Georgia

An ancient burial containing chariots, gold artifacts and possible human sacrifices has been unearthed by archaeologists in the country of Georgia, in South Caucasus.

The discovery was announced  at the International Congress on the Archaeology of the Ancient Near East at the University of Basel (Switzerland) by Zurab Makharadze, head of the Center of Archaeology at the Georgian National Museum in Tbilisi.

The timber burial site dates back to the Early Bronze Age. It was discovered within a 12 m high mound called a kurgan. When the archaeologists reached the chamber they found an assortment of treasures, including two chariots, each with four wooden wheels. The burial chamber is believed to have belonged high-ranking person.

The burial contained the remains of seven individuals. “One of them was a chief and others should be the members of his family, sacrificed slaves or servants,” Makharadze told Live Science. Ornamented clay and wooden vessels, flint and obsidian arrowheads, leather and textiles, a wooden armchair, carnelian and amber beads, and 23 gold items were also recovered from the Early Bronze Age burial. “The purpose of the wooden armchair was the indication to power, and it was put in the kurgan as a symbol of power,” Makharadze explained.

As the burial dates back to a time before domesticated horses appeared in the area, archaeologists believe that the chariots would have been pulled by oxen.

Other rich kurgan burials dating to the second half of the third millennium B.C. have also been found in the south Caucasus, said Makharadze in another paper he presented in February at the College de France in Paris. These burials could be connected to interactions that occurred between nomadic people from the Eurasian steppes and farming communities within and near the south Caucasus, according to Makharadze. These interactions appear to have led to some individuals, like this chief, getting elaborate burials.

The kurgan was found in eastern Georgia near the municipality of Lagodekhi and was excavated in 2012.