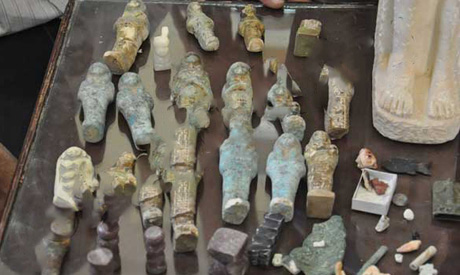 Looted Egyptian artefacts were recovered by the Tourism and Antiquities Police after the members of a gang specialising in illegal excavation work and the looting of antiquities have been caught.

The police arrested the gang leader in his home in Giza’s Abu Sir village, where a collection of 17 authentic Islamic coins, 12 Ancient Egyptian ushabti figurines and a replica statue were found hidden inside an oven.

According to the police report, the looted artefacts come from a remote archaeological area in Abu Sir, where the gang had carried out illegal excavations.

General Osama El-Nawawi, head of the investigation department at the Tourism and Antiquities Police, requested that an archaeological committee be dispatched by the Ministry of Antiquities to examine the authenticity of the confiscated objects.