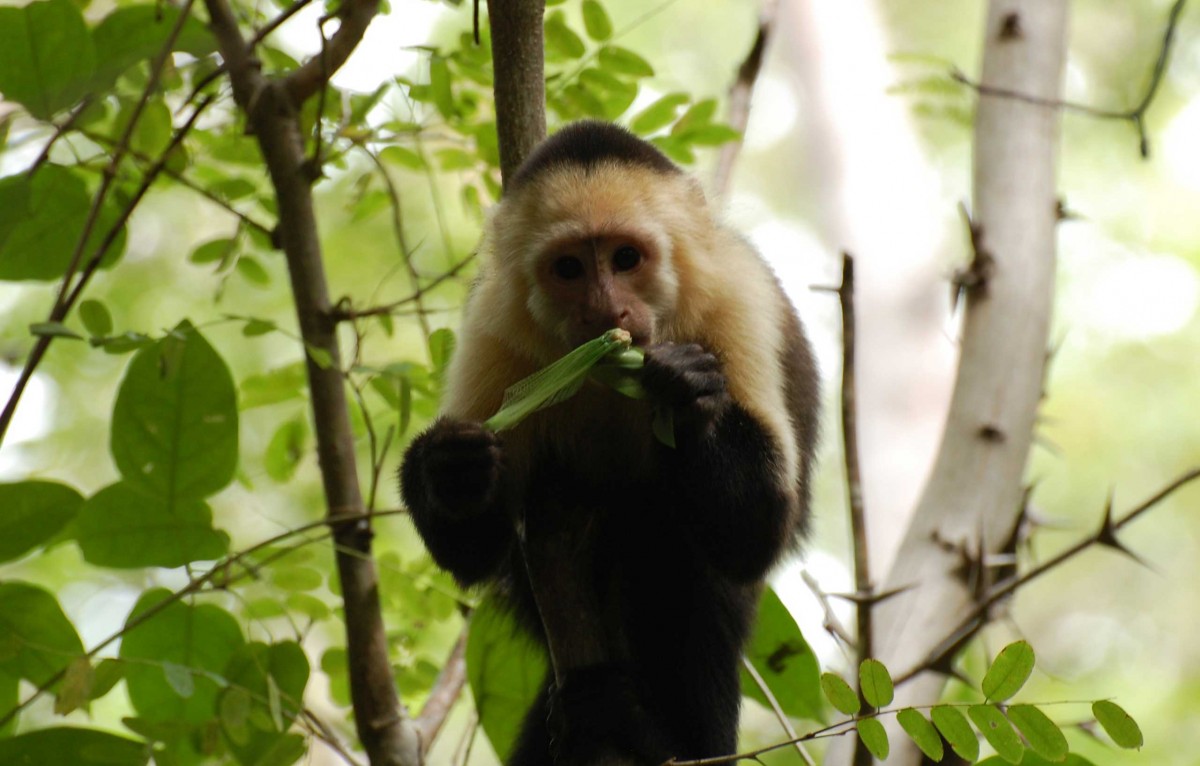 Insects: A key factor in the development of uniquely human skills

Insects may have been a key factor in the development of uniquely human skills, suggests research from Washington University in St. Louis.

Figuring out how to survive on a lean-season diet of hard-to-reach ants, slugs and other bugs may have spurred the development of bigger brains and higher-level cognitive functions in the ancestors of humans and other primates.

“Challenges associated with finding food have long been recognized as important in shaping evolution of the brain and cognition in primates, including humans,” said Amanda D. Melin, PhD, assistant professor of anthropology in Arts & Sciences and lead author of the study.

“Our work suggests that digging for insects when food was scarce may have contributed to hominid cognitive evolution and set the stage for advanced tool use.”

Based on a five-year study of capuchin monkeys in Costa Rica, the research provides support for an evolutionary theory that links the development of sensorimotor (SMI) skills, such as increased manual dexterity, tool use, and innovative problem solving, to the creative challenges of foraging for insects and other foods that are buried, embedded or otherwise hard to procure.

Published in the June 2014 Journal of Human Evolution, the study is the first to provide detailed evidence from the field on how seasonal changes in food supplies influence the foraging patterns of wild capuchin monkeys.

The study is co-authored by biologist Hilary C. Young and anthropologists Krisztina N. Mosdossy and Linda M. Fedigan, all from the University of Calgary, Canada.

It notes that many human populations also eat embedded insects on a seasonal basis and suggests that this practice played a key role in human evolution.

“We find that capuchin monkeys eat embedded insects year-round but intensify their feeding seasonally, during the time that their preferred food – ripe fruit – is less abundant,” Melin said. “These results suggest embedded insects are an important fallback food.”

The key role of fallback foods in human evolution

Previous research has shown that fallback foods help shape the evolution of primate body forms, including the development of strong jaws, thick teeth and specialized digestive systems in primates whose fallback diets rely mainly on vegetation.

This study suggests that fallback foods can also play an important role in shaping brain evolution among primates that fall back on insect-based diets, and that this influence is most pronounced among primates that evolve in habitats with wide seasonal variations, such as the wet-dry cycles found in some South American forests.

“Capuchin monkeys are excellent models for examining evolution of brain size and intelligence for their small body size, they have impressively large brains,” Melin said. “Accessing hidden and well-protected insects living in tree branches and under bark is a cognitively demanding task, but provides a high-quality reward: fat and protein, which is needed to fuel big brains.”

But when it comes to using tools, not all capuchin monkey strains and lineages are created equal, and Melin’s theories may explain why.

Perhaps the most notable difference between the robust (tufted, genus Sapajus) and gracile (untufted, genus Cebus) capuchin lineages is their variation in tool use. While Cebus monkeys are known for clever food-foraging tricks, such as banging snails or fruits against branches, they can’t hold a stick to their Sapajus cousins when it comes to the innovative use and modification of sophisticated tools.

One explanation, Melin said, is that Cebus capuchins have historically and consistently occupied tropical rainforests, whereas the Sapajus lineage spread from their origins in the Atlantic rainforest into drier, more temperate and seasonal habitat types.

“Primates who extract foods in the most seasonal environments are expected to experience the strongest selection in the ‘sensorimotor intelligence’ domain, which includes cognition related to object handling,” Melin said. “This may explain the occurrence of tool use in some capuchin lineages, but not in others.”

Genetic analysis of mitochondial chromosomes suggests that the Sapajus-Cebus diversification occurred millions of years ago in the late Miocene epoch.

“We predict that the last common ancestor of Cebus and Sapajus had a level of SMI more closely resembling extant Cebus monkeys, and that further expansion of SMI evolved in the robust lineage to facilitate increased access to varied embedded fallback foods, necessitated by more intense periods of fruit shortage,” she said.

One of the more compelling modern examples of this behavior, said Melin, is the seasonal consumption of termites by chimpanzees, whose use of tools to extract this protein-rich food source is an important survival technique in harsh environments.

What does this all mean for hominids?

While it’s hard to decipher the extent of seasonal dietary variations from the fossil record, stable isotope analyses indicate seasonal variation in diet for at least one South African hominin, Paranthropus robustus. Other isotopic research suggests that early human diets may have included a range of extractable foods, such as termites, plant roots and tubers.

Modern humans frequently consume insects, which are seasonally important when other animal foods are limited.

This study suggests that the ingenuity required to survive on a diet of elusive insects has been a key factor in the development of uniquely human skills: It may well have been bugs that helped build our brains.