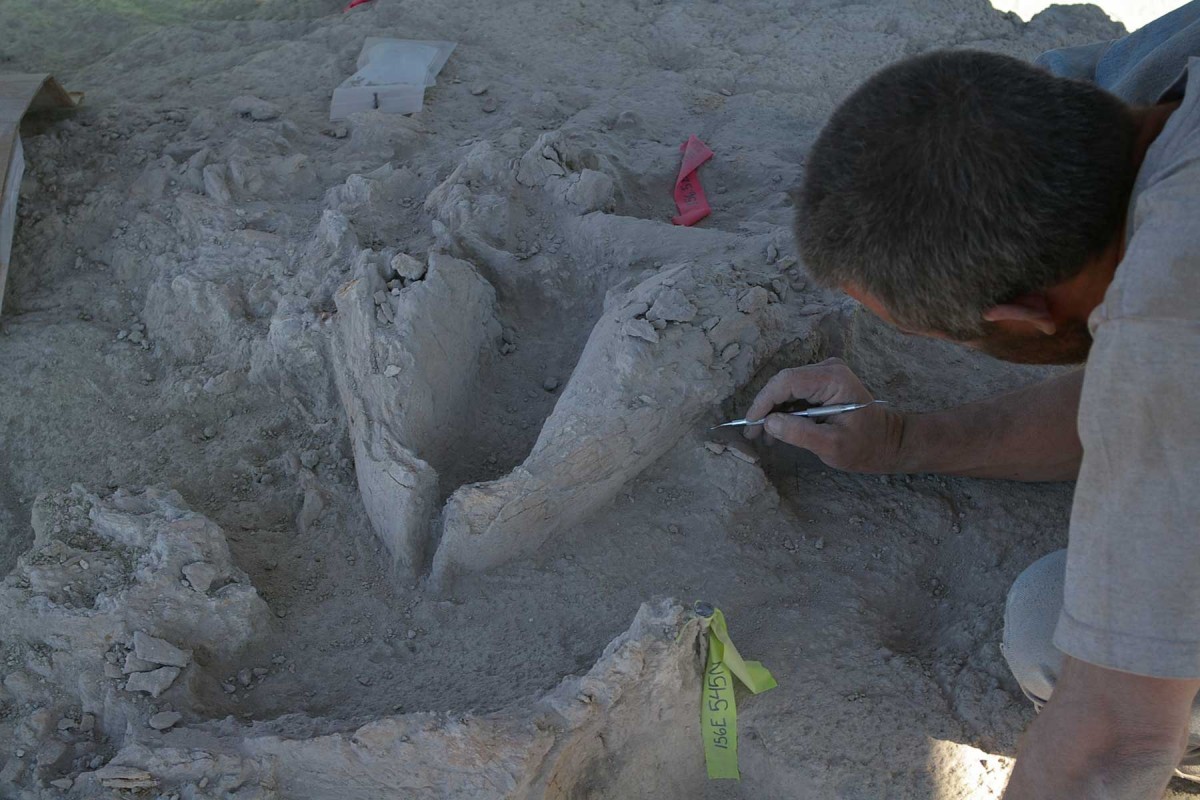 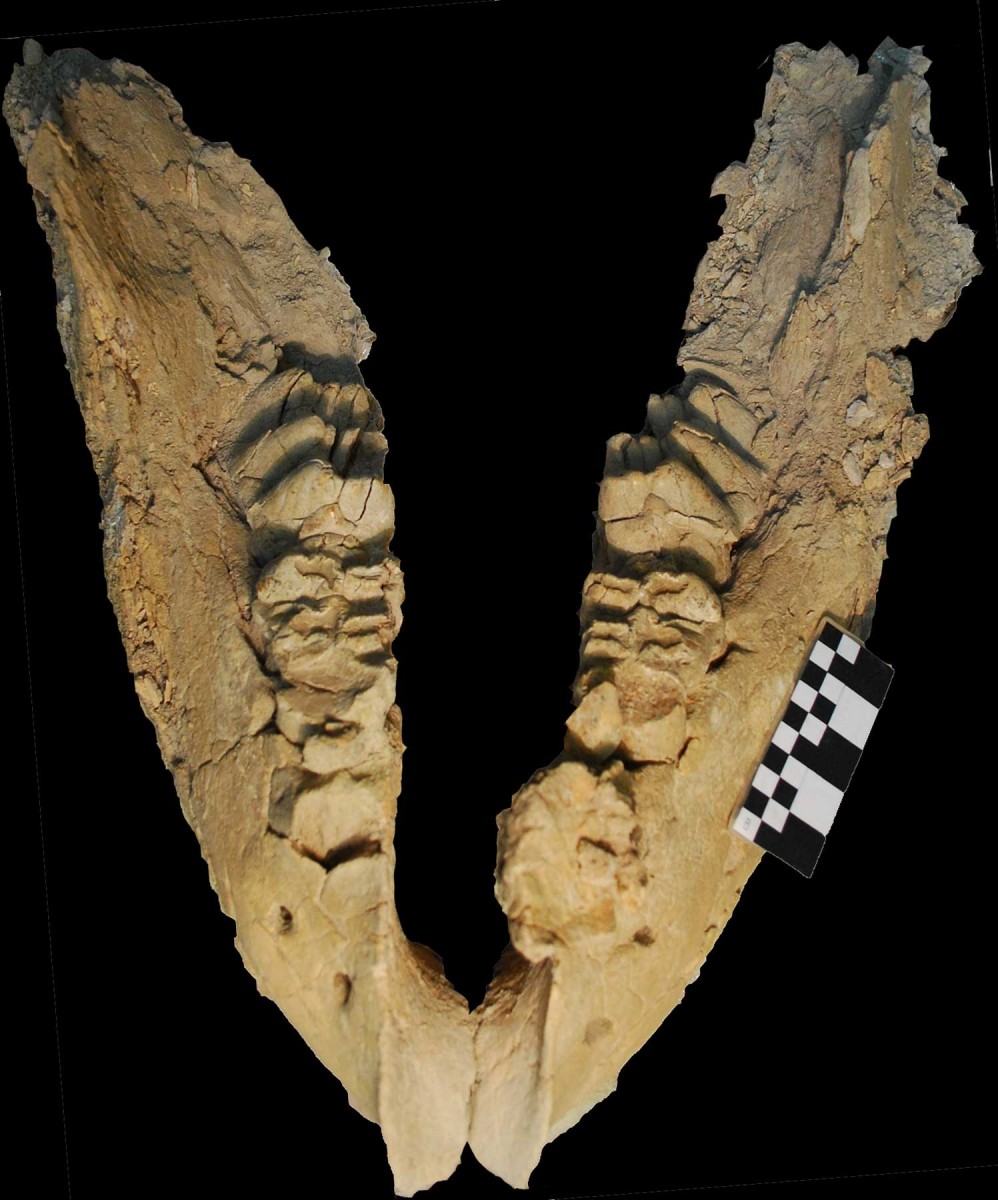 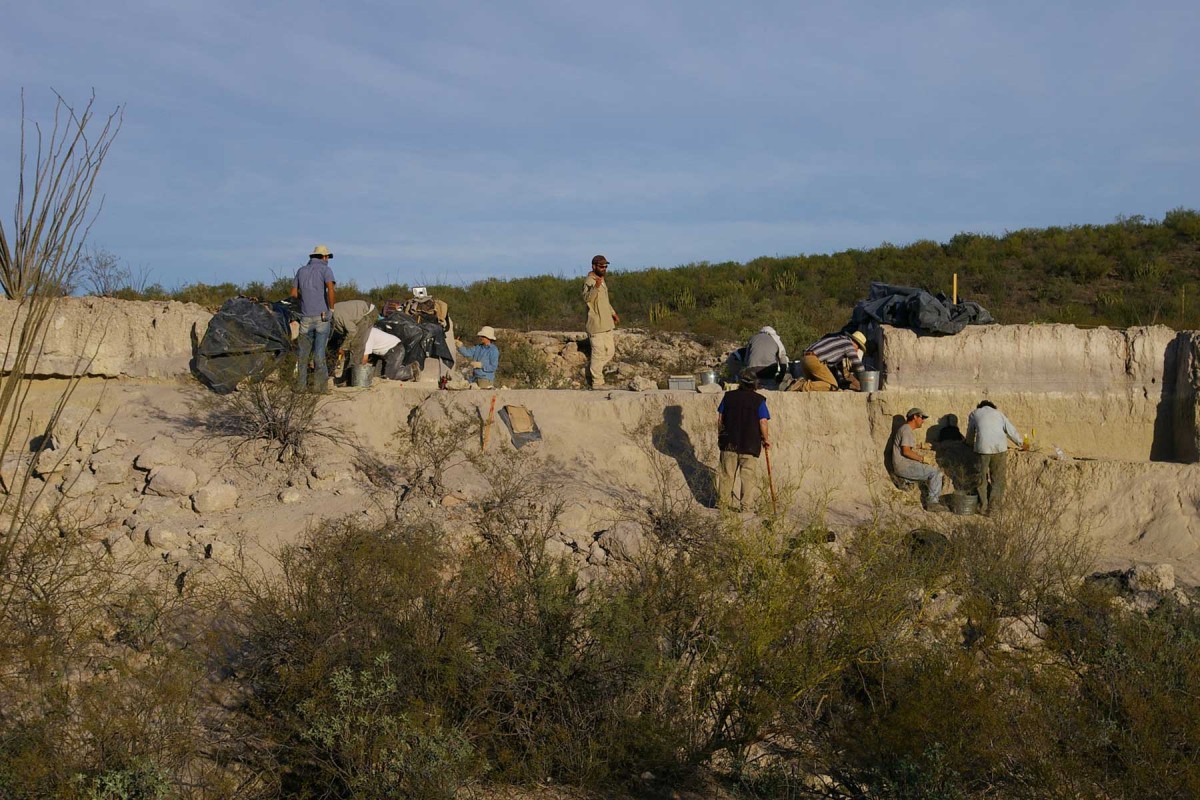 UA Archaeologist Involved in Discovery of Bones of Elephant Ancestor

Meet the Gomphothere! Archaeologists weren’t sure at first what kind of animal they had uncovered, until they found a telltale jawbone.

An animal once believed to have disappeared from North America before humans ever arrived there might actually have roamed the continent longer than previously thought – and it was likely on the list of prey for some of continent’s earliest humans, researchers from the University of Arizona and elsewhere have found.

Archaeologists have discovered artifacts of the prehistoric Clovis culture mingled with the bones of two gomphotheres, ancient ancestors of the elephant, at an archaeological site in northwestern Mexico.

The discovery suggests that the Clovis – the earliest widespread group of hunter-gatherers to inhabit North America – likely hunted and ate gomphotheres. The members of the Clovis culture were already well-known as hunters of the gomphotheres’ cousins, mammoths and mastodons.

Although humans were known to have hunted gomphotheres in Central America and South America, this is the first time a human-gomphothere connection has been made in North America, says archaeologist Vance Holliday, who co-authored a new paper on the findings, published this week in Proceedings of the National Academy of Sciences.

“This is the first archaeological gomphothere found in North America, and it’s the only one known,” said Holliday, a professor of anthropology and geology at the UA.

Holliday and colleagues from the U.S. and Mexico began excavating the skeletal remains of two juvenile gomphotheres in 2007 after ranchers alerted them that the bones had been found in northwestern Sonora, Mexico.

They didn’t know at first what kind of animal they were dealing with.

“At first, just based on the size of the bone, we thought maybe it was a bison, because the extinct bison were a little bigger than our modern bison,” Holliday said.

Then, in 2008, they discovered a jawbone with teeth, buried upside down in the dirt.

“We finally found the mandible, and that’s what told the tale,” Holliday said.

Gomphotheres were smaller than mammoths – about the same size as modern elephants. They once were widespread in North America, but until now they seemed to have disappeared from the continent’s fossil record long before humans arrived in North America, which happened some 13,000 to 13,500 years ago, during the late Ice Age.

However, the bones that Holliday and his colleagues uncovered date back 13,400 years, making them the last known gomphotheres in North America.

The gomphothere remains weren’t all Holliday and his colleagues unearthed at the site, which they dubbed El Fin del Mundo – Spanish for The End of the World – because of its remote location.

As their excavation of the bones progressed, they also uncovered numerous Clovis artifacts, including signature Clovis projectile points, or spear tips, as well as cutting tools and flint flakes from stone tool-making. The Clovis culture is so named for its distinctive stone tools, first discovered by archaeologists near Clovis, New Mexico, in the 1930s.

Radiocarbon dating, done at the UA, puts the El Fin del Mundo site at about 13,400 years old, making it one of the two oldest known Clovis sites in North America; the other is the Aubrey Clovis site in north Texas.

The position and proximity of Clovis weapon fragments relative to the gomphothere bones at the site suggest that humans did in fact kill the two animals there. Of the seven Clovis points found at the site, four were in place among the bones, including one with bone and teeth fragments above and below. The other three points had clearly eroded away from the bone bed and were found scattered nearby.

The dig at El Fin del Mundo, a joint effort between the U.S. and Mexico, was funded by the UA School of Anthropology’s Argonaut Archaeological Research Fund, the National Geographic Society, the Instituto Nacional de Antropología e Historia and The Center for Desert Archaeology in Tucson.