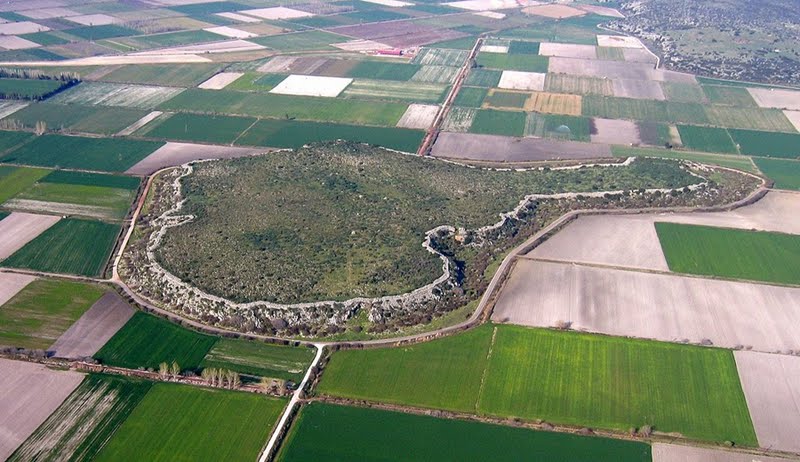 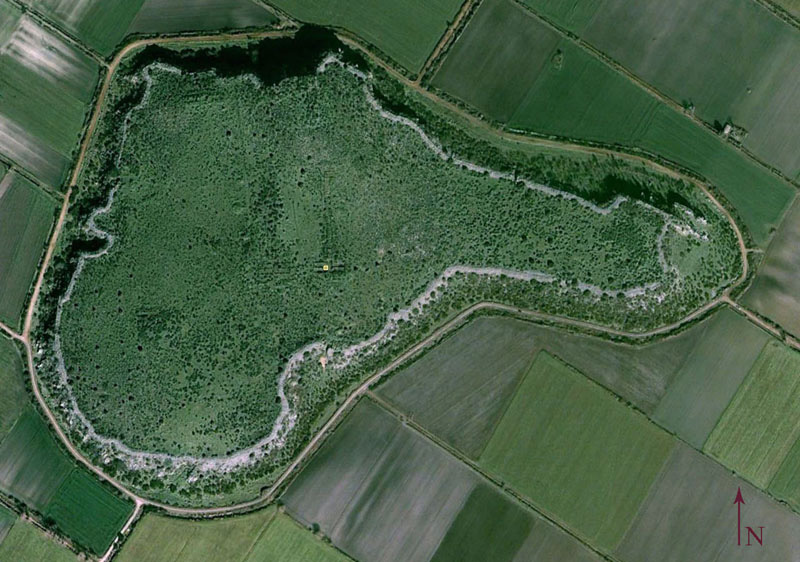 A team of archaeologists is excavating the remains of a vast ancient Mycenaean citadel, known as Glas or Kastro (castle). Under the leadership of Associate Professor Christofilis Maggidis of Dickinson College and the auspices of the Athens Archaeological Society, teams of specialists have been systematically surveying the imposing, island-like, flat-topped bedrock outcrop that rises 20-40 meters above a surrounding plain with a summit area stretching 49.5 acres at the northeastern edge of the Kopais basin in southeastern Greece. The area is estimated to measure ten times the size of the ancient citadel of Mycenaean Tiryns and seven times that of Mycenae.

“I first excavated at Glas in 1990 as a graduate student with my mentor, the late Spyros Iakovidis,” said Maggidis. “The unparalleled size of the citadel, its connection with the gigantic drainage project of Kopais, and the discovery of such important but few remains in the citadel indicating that the rest of the citadel was left vacant puzzled me since then.”

The effective regulation of production and organization of the socio-economic life by the Mycenaean palatial administration and a long period of prosperity and stability led to population growth, as indicated by the rapid increase in the number and size of the Mycenaean settlements and cemeteries, and their geographical distribution in the homeland and abroad in the 13th century BC. Given the indigenous environmental circumscription and resource limitations, demographic growth necessitated expansion and intensification of specialized agricultural production to meet basic needs and afford surplus for exportation.

In the closing years of the 14th century BC (LH IIIA2) a large-scale engineering project of gigantic proportions was realized in Boeotia, perhaps a joint venture of the neighboring palaces of Thebes and Orchomenos, which effectively transformed the Kopais basin (ca. 20,000 ha) into the most fertile plain on mainland Greece: the submerged marshland was artificially drained by means of an ingenious and complex drainage control system which involved course diversion of six rivers and streams from the basin into wide peripheral –and possibly navigable (?)– canals, protected by massive watertight embankments (reinforced in places with Cyclopean revetments and bearing roads on their crowns) and supplied with underground drains and channels leading the water overflow into artificial polders, natural bedrock cavities and sinkholes (καταβόθραι), or to the bay of Larymna.

The Kopais drainage project was colossal by both ancient and modern standards: it is estimated that 2,000,000 cubic meters of earth were moved to build the extensive dykes and massive embankments (2m high and 30m wide) running for many kilometers on the periphery of the basin, more than 250,000 cubic meters of stone were used to revet the embankments, and the water overflow of the main canal is estimated at 100 cubic meters per sec. The area once named “Arne” was still remembered as “multi-vined” in the Iliad (“polystaphylon Arne,” II 507) and Orchomenos as one of the richest kingdoms of the heroic past (Iliad I. 381-382), whose wealth and power was associated in the ancient literary sources with the cultivation of the drained lake (Strabo IX.2.40; Pausanias IX.17.2; Diodorus IV.18.7).

A citadel ten times the size of Tiryns

Glas was built on top of an island-like, flat-topped bedrock outcrop rising 20-40 m above the plain below and encompassing an area of 20 ha or 49.5 acres (ten times the size of Tiryns and seven times that of Mycenae) at the north-eastern edge of the Kopais basin. The Mycenaean citadel of Glas was fortified by a massive cyclopean wall (5.50-5.80m thick) which runs along the brow of the rocky natural platform for approximately 3 kms, features four gates (including one double gate), and encompasses a cluster of three adjacent and intercommunicating central enclosures.

The northern enclosure (3.7 acres or 1.5 ha) surrounds an administrative and residential complex with two “twin” long wings built at an angle on the summit of the rocky hill; either wing contains a focal, single-storey megaron-like room (“melathron”) at its remote end, which was richly decorated with frescoes but lacks a throne or a central hearth surrounded by interior columns, and several two-storey residential apartments communicating through two long corridors and a central staircase (II). The southern enclosure(12.6 acres or 5.1 ha) encompasses two parallel long storage buildings divided internally by cross-walls and equipped with wide access ramps, as well as other subsidiary rooms (guard houses, personnel residential quarters, kitchens) arranged quite symmetrically north and south of the storage facilities (III).

Another smaller enclosure is formed immediately east of the northern enclosure without any apparent entrance or visible ruins (I). Finally, an internal cross-wall running from the central tower of the southeast double gate to the north cyclopean wall separates and isolates the eastern sector of the citadel which was, thus, accessible only from the eastern entrance of the double gate (IV).

Glas was apparently the regional storage center of production and fortified administrative seat and residence of two local rulers who were probably appointed by the palaces of Thebes and Orchomenos to supervise and maintain the complex draining system, organize and regulate the agricultural production, manage taxation, central storage and redistribution of products (crops and wine), control and defend the satellite peripheral settlements and populations.

The three major Boeotian palatial centers, Thebes, Orchomenos, and Glas were destroyed by fire slightly earlier than Pylos, sometime in the advanced LH IIIB2 (ca. 1220/1200 BC), most likely by enemy action; Thebes and Orchomenos continued to exist and were reoccupied on a smaller scale, whereas Glas and the Kopais drainage works were completely destroyed and abandoned. This regional destruction may be associated with internal conflicts between the Mycenaean palaces of Thebes and Orchomenos, or, alternatively, may be attributed to external aggression by Mycenaeans from the Argolid.

Both versions have been well-preserved in mythology, literature, and folk memory: according to mythical tradition, Thebes attacked and destroyed Orchomenos, with Heracles blocking the sinkholes and flooding the lake (Strabo IX.2.40), and the Argives repeatedly campaigned against and finally besieged Thebes (Seven against Thebes, and the Epigonoi ); accordingly, the palace of Thebes (“Kadmeia ”) was not included among the Boeotians in the “Catalogue of Ships” (Iliad II.494-516), a separate and possibly much older poem later embodied in the Iliad, and the king (“wanax ”) of Thebes did not participate in the Trojan War which allegedly took place shortly after the destruction of Thebes. The citadel of Glas was destroyed and abandoned, never to be inhabited again.

History of the survey

“The citadel of Glas presented the lay-out of a fort with certain spatial peculiarities: only one third or less of the total area of the citadel (49.5 acres) seemed to be occupied by various buildings and structures (administrative buildings, storage facilities, workshops, kitchens, personnel residence quarters), whereas no other ruins had been located so far by surface survey anywhere else in the citadel.” Maggidis wanted to find out why the space outside the central enclosures appeared to be void of structures.

“I was convinced that Glas was much more than a fort administrating the drainage works of the Kopais lake and the local agricultural production, and decided to investigate the site further,” he said.

Beginning in 2010, Maggidis and his colleagues conducted a systematic geophysical survey of the citadel using ground penetrating radar (GPR), a Fluxgate gradiometer, electrical resistivity, and satellite imagery. The team focused primarily on unexplored areas and some already excavated sectors.

The results were illuminating. “The citadel of Glas was not left void of structures outside the central enclosures after all, but was apparently covered with many buildings of various uses, including at least five large and well-built complexes, extensive residential quarters and clusters of buildings stretching between these complexes, (semi)circular structures (silos?), a cistern, staircases, retaining walls and terraces. This is the picture of a fortified town.”

Though Maggidis and colleagues had come much closer to uncovering the true proportions and complexity of the citadel, he sees much more to be done. “The systematic investigation of the Mycenaean citadel of Glas will continue and intensify in the next decade,” says Magiddis. “The geophysical survey will focus on the eastern (Sector IV) and the western part of the citadel (Sector V), while systematic excavation will target select building complexes, clusters, and structures.”

The citadel of Glas has been partially excavated (central enclosures) by T.A. de Ridder (1893), I. Threpsiades (1955-1961) and Sp. Iakovidis (1981-1983, 1990-1991). The exemplary publication by Sp. Iakovidis of earlier and recent excavations in the Mycenaean citadel of Glas and the synthesis of archaeological, geoarchaeological, and historical evidence have established the form, function, organization, importance and uniqueness of this archaeological site.