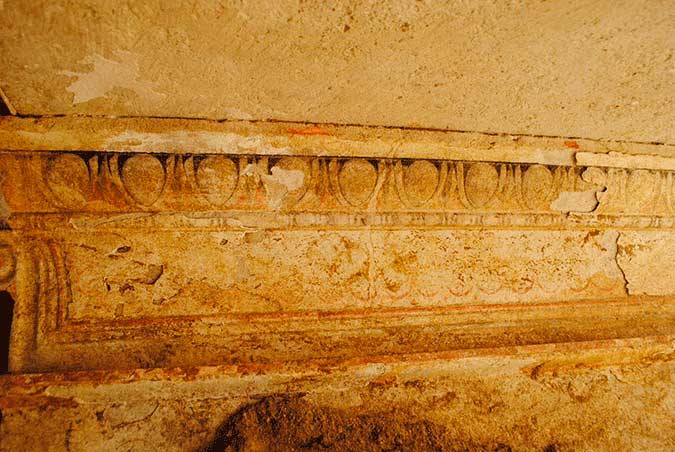 Amphipolis tomb entrance keeps getting revealed according to the latest press release courtesy of the Greek Ministry of Culture and Sport.

As stated in the announcement, released by the Ministry on behalf of the archaeological team excavating the monument at Kasta Tumulus, ten more stones which formed part of the seventh and eighth row of the sealing wall were removed with three more remaining of the eleven-row stone wall. Another part of the entrance to the tomb was revealed that way, bearing decoration similar to the one seen on the side walls: a white coloured fresco that mimics the marble enclosure. At the same time, under the Ionic capitals, the marble pilastres of the gateway have been revealed, covered in white fresco. By partially removing debris behind the entrance, its back side has been also revealed, demonstrating a similar degree of care in its construction, corresponding to the one seen on the front side. Traces of red and black are still surviving on its architrave’s frescoes, while the side and back view of the ionic capitals has been now revealed as showing frescoes in the same colours.

Meanwhile, the antechamber’s side walls, covered with Thassos marble and topped with ionic architrave have been revealed. Traces of black and red colour still survive on the architrave’s Ionic cymation.

Aside from the excavation, an operation of maintenance by conservation experts is in progress in the monument.