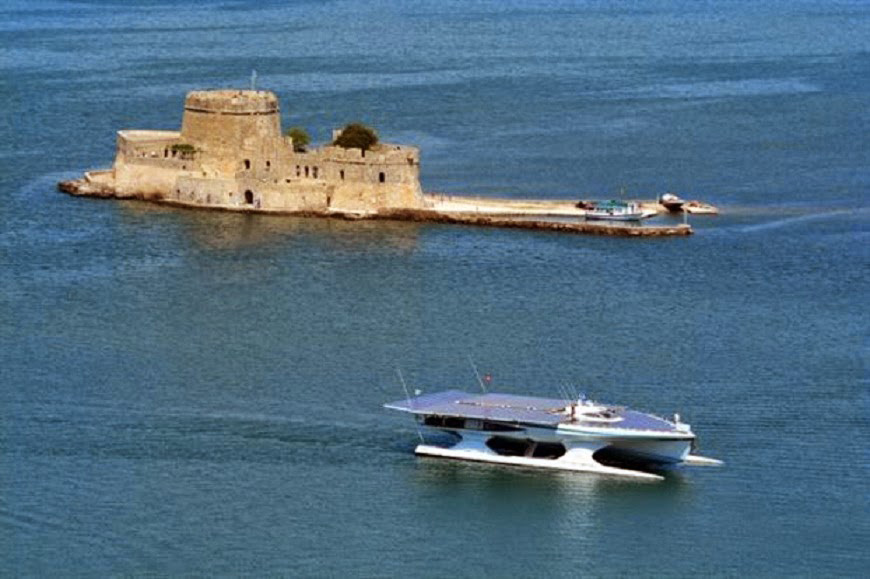 An archeological mission in Greece has found traces of what could be the site where the first European Lives. The mission took place on PlanetSolar, the world’s biggest solar boat.

Ever since humans built their first boat, offshore exploration has been one of the most fruitful ways to find out more about the world we live in. And this hasn’t stopped with the so-called Age of Exploration. Nowadays, scientists are travelling all across the world to study ecosystems, monitor climate change, discover new species or make groundbreaking archeological discoveries. However it has been claimed that such research can participate to damaging the environment.

This is where the TerraSubmersa expedition came in. Launched on 11 August and completed on August 28, the mission – jointly organised by the Swiss School of Archaeology and the Greek culture ministry – aimed to find what could be the oldest village in Greece and Europe. The team was looking for a Prehistoric site that would have been submerged by the waters of the Argolic Gulf, near the Franchthi Cave. This region is known for having welcomed the first Europeans between the Paleolithic and Neolithic periods.

“This cave was inhabited continuously for around 35,000 years… and we have reason to believe that towards the end of the Neolithic era, the inhabitants moved to a neighbouring site that is now underwater,” University of Geneva researcher Julien Beck told AFP.

But its ambitious archeological mission isn’t the only thing that makes the TerraSubmersa mission so special. To see through their mission, scientists have embarked on PlanetSolar, a catamaran which is also the world’s largest solar boat. With this move, the expedition intended to demonstrate how marine science can go forward without polluting the world’s oceans.

PlanetSolar’s 512m² of solar panels, supplying six blocks of lithium-ION batteries, allow the boat to operate solely on solar energy and to navigate for up to 72 hours in complete darkness. If the name ‘PlanetSolar’ sounds familiar to you, this is because this boat is also known for being the first vessel to have made a round the world trip purely on solar energy, in 2012.

“TerraSubmersa, which is the highlight of our 2014 season, is certainly the most fascinating [voyage we have made]. The highly precise navigation we will need, together with the excitement of discovery… all in the magnificent setting of the Argolic Gulf,” Gérard d’Aboville, the ship’s captain, declared with great enthusiasm as the trip started.

The mission was divided into two phases. The first consisted in introducing the archeologists’ work among the public and local authorities through a series of events organised in Eretria, Athens and Napflio. The second phase was exclusively dedicated to archeological research, and the team is extremely satisfied with the results.

“We collected fantastic data, whose analysis will take two years of work,” said Julien Beck in the official PlanetSolar Logbook. By mapping the seabeds, the team found paleobeaches dating back to different periods in prehistory. According to them, all signs lead to believe that these beaches were shaped by the inhabitants of the Franchti Cave, in which scientists recovered shells and the remains of fish.

The ship and its crew are currently sailing towards Venice. They are expected to drop anchor in Doges on September 4.