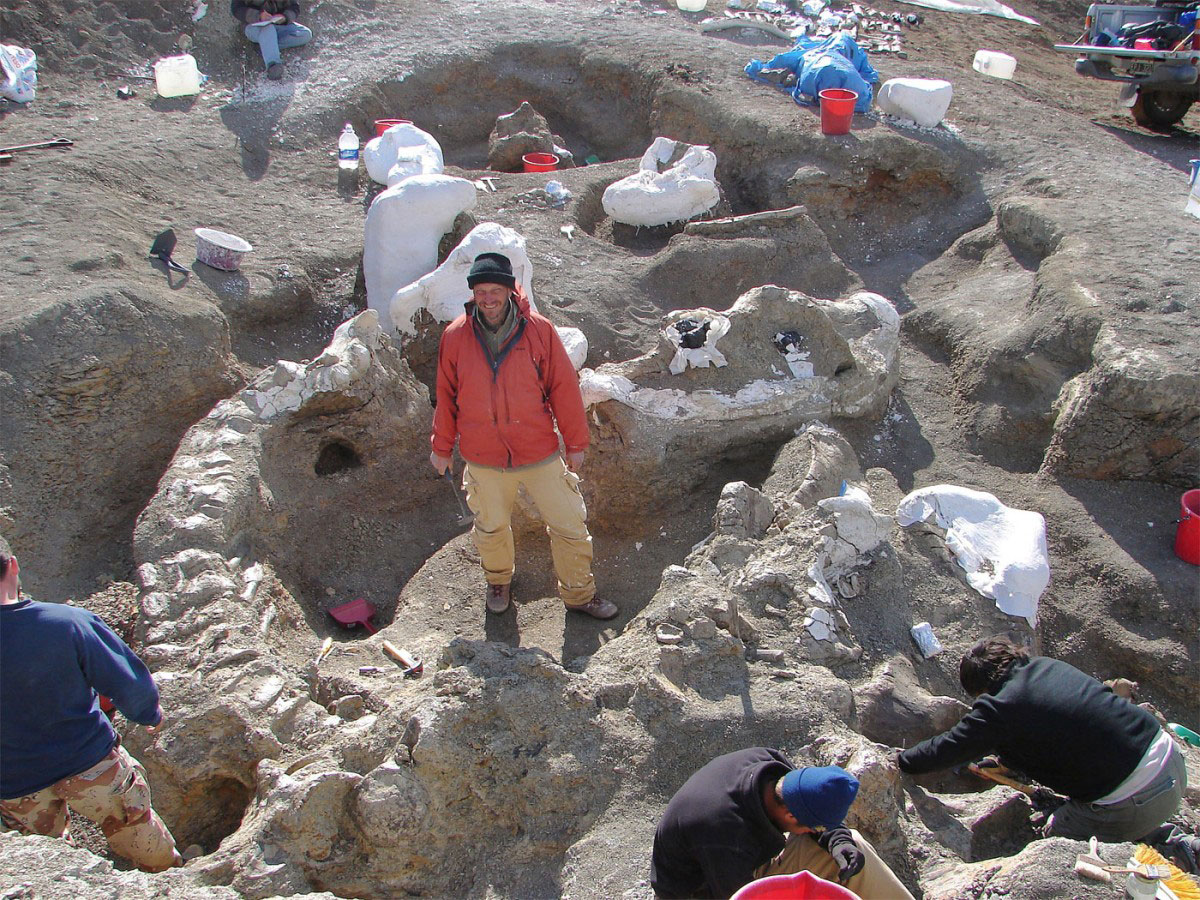 It belongs to a group of large plant eaters

Scientists have discovered and described a new supermassive dinosaur species with the most complete skeleton ever found of its type. At 85 feet long and weighing about 65 tons in life, Dreadnoughtus schrani is the largest land animal for which a body mass can be accurately calculated.

Its skeleton is exceptionally complete, with over 70 percent of the bones, excluding the head, represented. Because all previously discovered super-massive dinosaurs are known only from relatively fragmentary remains, Dreadnoughtus offers an unprecedented window into the anatomy and biomechanics of the largest animals to ever walk the Earth.

“Dreadnoughtus schrani was astoundingly huge,” said Kenneth Lacovara, an associate professor in Drexel University’s College of Arts and Sciences, who discovered the Dreadnoughtus fossil skeleton in southern Patagonia in Argentina and led the excavation and analysis. “It weighed as much as a dozen African elephants or more than seven T. rex. Shockingly, skeletal evidence shows that when this 65-ton specimen died, it was not yet full grown. It is by far the best example we have of any of the most giant creatures to ever walk the planet.”

Lacovara and colleagues published the detailed description of their discovery, defining the genus and species Dreadnoughtus schrani, in the journal Scientific Reports from the Nature Publishing Group. The new dinosaur belongs to a group of large plant eaters known as titanosaurs. The fossil was unearthed over four field seasons from 2005 through 2009 by Lacovara and a team including Lucio M. Ibiricu of the Centro Nacional Patagonico in Chubut, Argentina; the Carnegie Museum of Natural History’s Matthew Lamanna, and Jason Poole of the Academy of Natural Sciences of Drexel University, as well as many current and former Drexel students and other collaborators. These included three current NSF Graduate Research Fellows –current GRF Kristyn Voegele, and former GRFs Elena Schroeter and Paul Ullmann– all co-authors of this paper.

“The quality of this specimen has allowed us to study this new species in numerous aspects giving us closer to a holistic view than is possible for most dinosaur species,” said Voegele. “This could only be accomplished by collaborating with multiple experts – and without this collaboration our knowledge of this taxon would be fragmentary and not live up to the completeness and quality of the specimen. The NSF GRFP has enabled myself and two fellow collaborators to perform detailed analyses of this new species.”

“The fellowship awarded in 2013 acknowledged Kristyn’s scientific potential, and supports her contributions to this exciting discovery,” said Gisele Muller-Parker, program director for the Graduate Research Fellowship Program. “In addition to her research on dinosaur anatomy and biomechanics, Kristyn has been involved in a variety of related outreach activities, including an annual Community Dig Day and a Fossil Discovery Station for school visits at a fossil site in New Jersey.”