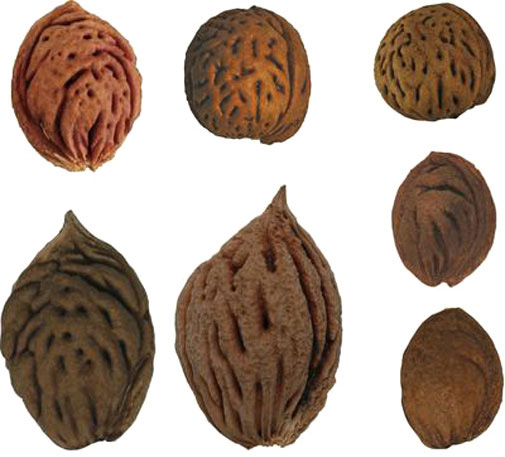 As peach trees in the Niagara Region of Ontario give up the last of their fruit for the season, their ancestors halfway around the globe are clamouring for attention.

In a study published today in PLOS ONE, Gary Crawford, a University of Toronto Mississauga anthropology professor, and two Chinese colleagues propose that the domestic peaches enjoyed worldwide today can trace their ancestry back at least 7,500 years ago to the lower Yangtze River Valley in Southern China, not far from Shanghai. The study, headed by Yunfei Zheng from the Zhejiang Institute of Archeology in China’s Zhejiang Province, was done in collaboration with Crawford and X. Chen, another researcher at the Zhejang Institute.

“Previously, no one knew where peaches were domesticated,” said Crawford. “None of the botanical literature suggested the Yangtze Valley, although many people thought that it happened somewhere in China.”

Radiocarbon dating of ancient peach stones (pits) discovered in the Lower Yangtze River Valley indicates that the peach seems to have been diverged from its wild ancestors as early as 7,500 years ago.

Archeologists have a good understanding of domestication – conscious breeding for traits preferred by people– of annual plants such as grains (rice, wheat, etc.), but the role of trees in early farming and how trees were domesticated is not well documented. Unlike most trees, the peach matures very quickly, producing fruit within two to three years, so selection for desirable traits could become apparent relatively quickly. The problem that Crawford and his colleagues faced was how to recognize the selection process in the archeological record.

Peach stones are well represented at archeological sites in the Yangtze valley, so they compared the size and structure of the stones from six sites that spanned a period of roughly 5,000 years. By comparing the size of the stones from each site, they were able to discern peaches growing significantly larger over time in the Yangtze valley, demonstrating that domestication was taking place. The first peach stones in China most similar to modern cultivated forms are from the Liangzhu culture, which flourished 4,300 to 5300 years ago.

“We’re suggesting that very early on, people understood grafting and vegetative reproduction, because it sped up selection,” Crawford said. “They had to have been doing such work, because seeds have a lot of genetic variability, and you don’t know if a seed will produce the same fruit as the tree that produced it. It’s a gamble. If they simply started grafting, it would guarantee the orchard would have the peaches they wanted.”

Crawford and his colleagues think that it took about 3,000 years before the domesticated peach resembled the fruit we know today.

“The peaches we eat today didn’t grow in the wild,” Crawford added. “Generation after generation kept selecting the peaches they enjoyed. The product went from thinly fleshed, very small fruit to what we have today. Peaches produce fruit over an extended season today but in the wild they have a short season. People must have selected not only for taste and fruit size, but for production time too.”

Discovering more about the origins of domesticated peaches tells us more about our human ancestors, too, Crawford noted.

Crops such as domesticated peaches indicate that early people weren’t passive in dealing with the environment. Not only did they understand grain production, but the woodlands and certain trees were being manipulated early on.

“There is a general sense that people in the past were not as smart as we are,” said Crawford. “The reality is that they were modern humans with the brain capacity and talents that we have now.

“People have been changing the environment to suit their needs for a very long time, and the domestication of peaches helps us understand this.”