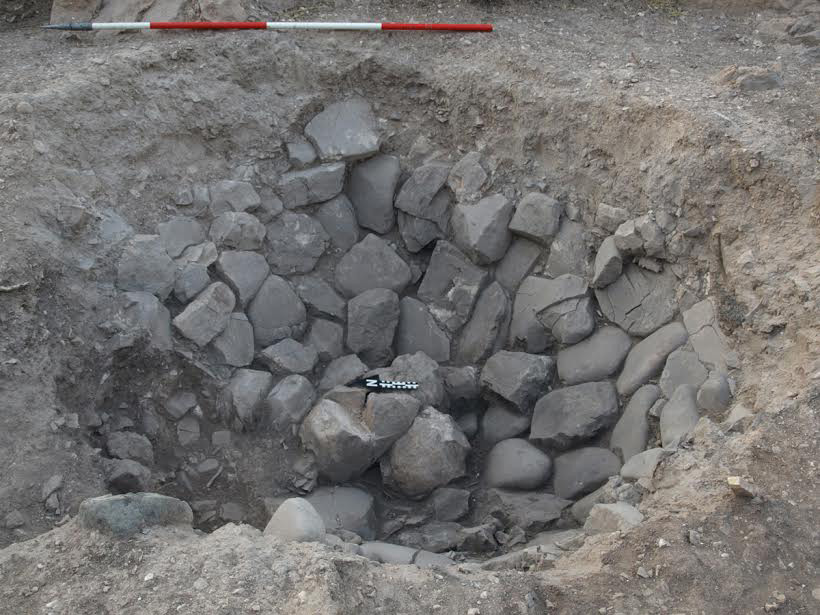 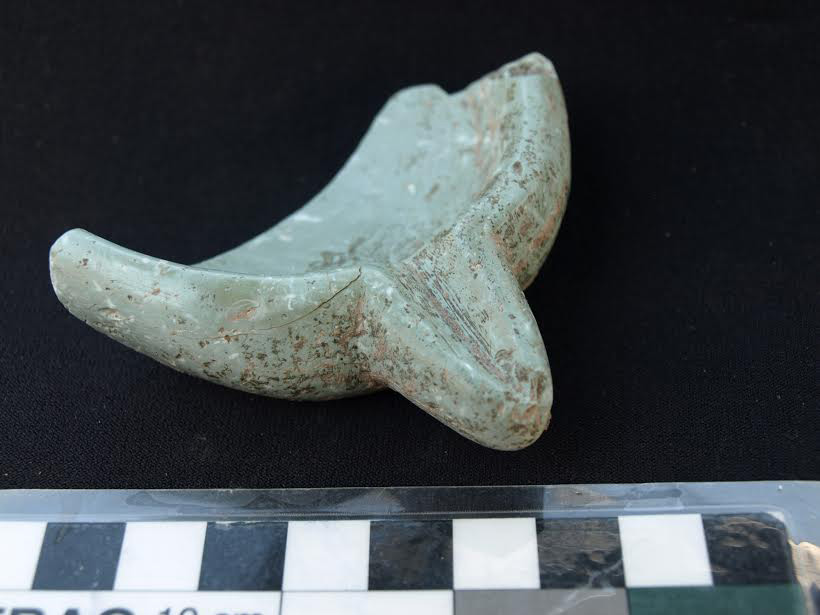 Τhe 2014 University of Edinburgh archaeological investigations at the multi-period site of Prastio-Mesorotsos in the Pafos district have been completed.

This season the team targeted the prehistoric remains from this long-lived site. The earliest deposits date to the Pre-Pottery Neolithic period, revealed in a series of seasonal occupational deposits, storage pits and food preparation areas. Two features from different areas of the site show variation and sophistication in pyrotechnology. In one instance, a large stone-lined pit (fig. 1) showed evidence of burning and was filled with a concentration of ash. If this feature was for roasting food, this pit-roast technique would have served the needs of a great number of people, possibly bands of hunters exploiting the upland resources.

In another area, a smaller scale (c. 70cm) but roughly contemporary feature was an above-ground mud-built (pisé) domed structure similar to a tanour or kleftiko type oven. This smaller domed oven could have been used for baking bread or roasting meat, but represents domestic-scale usage attesting diversity of activities.

Very close to the domed oven was an enigmatic series of shallow pits, at least 12 in total, that were cut into one another by the ancient inhabitants over a long period of time, from the Pre-pottery Neolithic to the Ceramic (Late) Neolithic phase of the site. Many of these pits were filled deliberately with carefully-placed special objects, attesting occupational longevity and social memory of activity spaces. One of the earlier pits contained a very finely made picrolite shallow bowl with a spout similar to one from Kalavassos Tenta and reminiscent of ones from Choirokoitia (fig. 2). A later pit contained a complete articulated human mandible (jawbone), which before erosion might have been a complete skull. In an even later pit a carefully placed broken ceramic cooking vessel with a ground stone tool nestled inside were found. This concentration of pits and the repeated use of this place for disposing of unusual objects hint to special behaviours and rituals.

Previous seasons of excavation have revealed an extensive and complicated Bronze Age sequence of occupation. This summer, a new area was opened to investigate a Bronze Age wall that was eroding out of the modern surface of the hillside. In this salvage operation, a stone wall foundation at least five courses high and a series of intact floor deposits with rich archaeological materials on the surfaces were found. Although this new exposure was limited in scope this season, the team intends to return to this area in subsequent years.

Previously excavated Bronze Age exposures were expanded this year, revealing further traces of Early and Middle Cypriot Bronze Age houses and work areas. The Early Cypriot occupation continues to display remnant behaviours from the Chalcolithic forebears, including curvilinear architecture and adaptations from earlier material culture, with major changes in artefacts and architecture occurring in the transition into the Middle Cypriot Bronze Age. The Middle Cypriot period is when the inhabitants began to intensify their lifestyle and social organization. This season it was confirmed that a large wall (1.6m at its thickest), built to delineate two areas of the site, at one point featured a path through the wall with a pebble ramp connecting higher and lower portions of the site. At some point the ramp was blocked by a continuation of the wall cutting off this access, possibly because of drainage issues. These massive construction events took place just before the site was abandoned near the end of the Middle Cypriot period, not to be resettled until after the Late Bronze Age in the Geometric and later periods.

The excavations were conducted from the 9th of June to the 13th of July 2014. The team is led by Dr. Andrew McCarthy, Fellow of the School of History, Classics and Archaeology at the University of Edinburgh, and Director of the Cyprus American Archaeological Research Institute (CAARI). The project involves the cooperation of an international team of specialists and field school students.

NOTES
1. Department of Antiquities of the Republic of Cyprus (Press release)