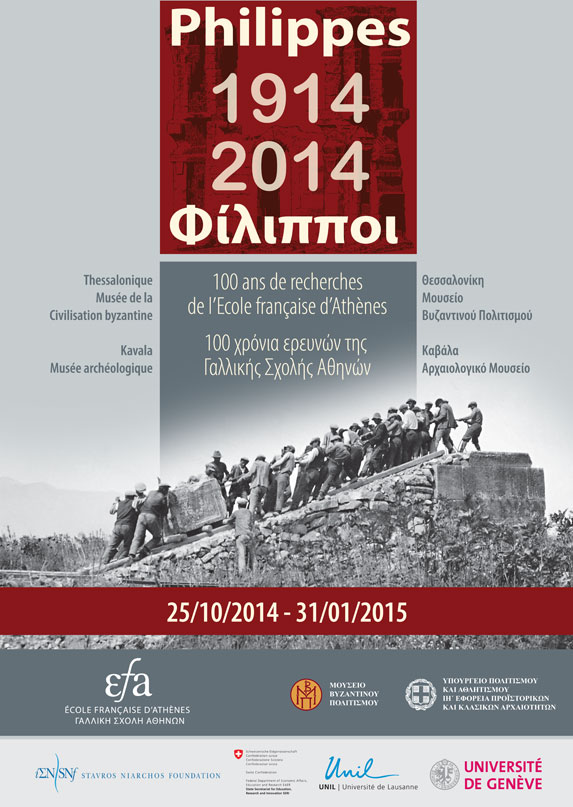 100 years of research by the French School at Athens

The exhibition “Philippoi 1914-2014: 100 years of research by the French School at Athens” narrates the history of excavations and surveys at Philippoi and will be shown at the Museum of Byzantine Culture, in Thessaloniki.

The exhibition is divided into three basic units. The first presents the history of Philppi, the place and its pioneers; the second, the history of the excavations (through a detailed presentation of the excavation periods, the monuments, the moveable finds and the restoration efforts); and the third, the people, the excavators and the conditions under which they worked and lived, as well as the history of the wider area, the present day and the future of research. The exhibition is accompanied by two screenings about Paul Collart and the conditions and prevailing atmosphere in France and Greece during the first half of the 20th century, the period of the French School’s excavations.

The exhibition will be inaugurated on Thursday, October 23, 2014, at 8.00 p.m. Before the opening, at 6.00 p.m., the opening session of an international conference, entitled “The site of Philippi, Past,  Present and Future”, will take place at the Amphitheater “Stephanos Dragoumis”, addressed by Agathonikè Tsilipakou (Director of the Museum of Byzantine Culture) and Alexandre Farnoux (Director of the French School at Athens). The keynote speech “Philippes, la redécouverte d’un site. 100 années de recherches historiques et archéologiques” will be given by Pierre Ducrey (Foreign associate of the Académie des Inscriptions et Belles-Lettres, Institut de France, and President of the Administrative Council of the French School at Athens).