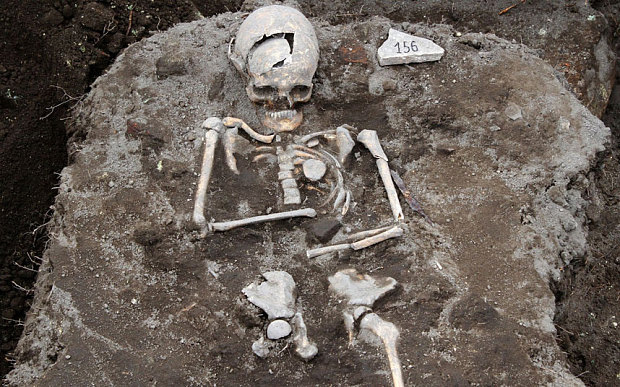 The skeleton of a young man pinned down through the chest with an iron rod was unearthed by Bulgarian archaeologists at the Thracian site of Perperikon, according to Novinite. The iron stake led archaeologists to term the burial as a “vampire grave”, due to the known “anti-vampire” practice, which was common in some Bulgarian villages up until the first decade of the 20th century.

This practice was often applied to people who had died under unusual circumstances, or had committed suicide, director of the National History Museum in Sofia, Professor Nikolai Ovcharov (nicknamed “Bulgaria’s Indiana Jones) explained to the “Telegraph”. Stabbing these skeletons with a rod or a stake was believed to prevent them from rising from the dead and terrorizing the living. However, even people who had led an unusual way of life (such as alcoholics or outsiders) were suspect of becoming vampires after death and subsequently stabbed with a rod, just in case…

The anti-vampire ritual was so common in Balkan countries, that up to 100 “vampire skeleton” burials have been found so far only in Bulgaria.

According to Novinite, another grave was revealed at the site of Perperikon, this one of a woman and child, positioned to create the image of the Virgin Mary and child. Ovcharov says that this type of burial was thought to prevent people from the plague.

Both burials are dated to the first half of the 13th c. AD.

There is a strong similarity between this find and two burials discovered in 2012-2013 in Sozopol, the “twin vampires of Sozopol”.