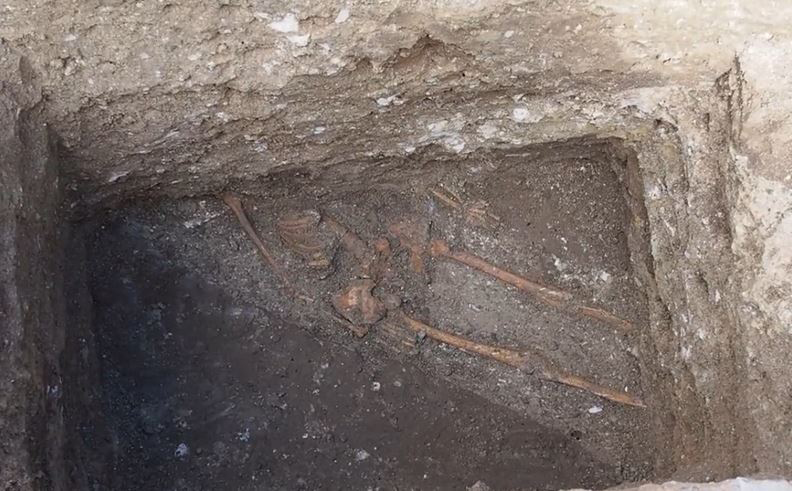 A tall man’s skeleton buried in a construction ditch partly under the fortress wall of the Greek and Roman ancient city of Odessos has been discovered in the downtown of Bulgaria’s Varna.

The skeleton was revealed during rescue excavations conducted by archaeologists from the Varna Museum of Archaeology (also called Varna Regional Museum of History).

The skeleton is dated to the late 4th century or the early 5th century AD, according to Dr. Valeri Yotov head of the Odessos excavations.

It has been found near the St. Nikolay Church. At a distance of just 20 meters a 5th century earthen jar was discovered in January 2015 by construction workers, a discovery that triggered the rescue excavations of the so called Varna Largo, the passenger zone on the central Knyaz Boris I Boulevard.

Last week, the Varna archaeologists found remains of the Odessos fortress wall, fragments of another earthen jar and a hand mill from late Antiquity.

“As we started to uncover the ancient fortress wall, we started asking ourselves a lot of questions, and, of course, we had to keep digging to reach the wall’s foundations. That’s how we stumbled upon the skeleton,” explains Yotov.

Varna archaeologists believe that the skeleton belongs to a man who died during the construction of the fortress wall of ancient Odessos. “It is possible that someone used the pit, which had been dug up [for construction purposes], to bury the body,” Yotov says.

Archaeologists found out that the body was originally buried in a depth of three metres. Since graves of such depth are very rare, they assume that the pit must have been dug up as a construction ditch at the time when Odessos’s fortress wall was being erected.

Further evidence of a burial, according to the Varna archaeologists, is that the tall man’s skeleton lies in an east-west position, and his hands are placed on his waist.

While archaeologists find nothing exceptional about their find, Varna people have already begun to speculate about the origins of the skeleton. Some have even been quick to describe the ancient man as a representative of the “long extinct race of Atlantis giants”.

“There are no indications that this man was a vampire, an Atlantis giant, or anything like that,” archaeologist Valeri Yotov has commented, apparently referring to a host of discoveries in Bulgaria in recent years of impaled medieval skeletons.

The rescue digs of ancient Odessos are set to continue for a few more weeks, as Varna archaeologists believe they will also reveal the main gate of the fortification walls.