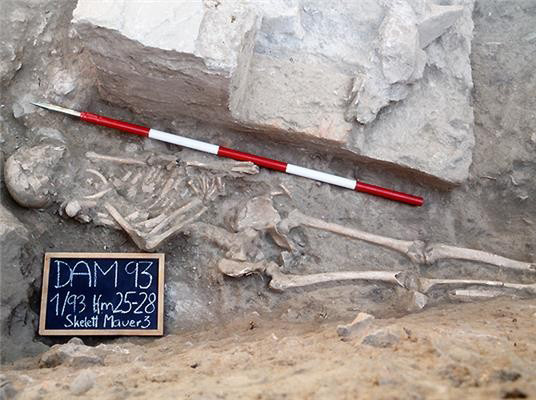 Investigations on bones of warriors found in Ephesos

Roman gladiators ate a mostly vegetarian diet and drank ashes after training as a tonic. These are the findings of anthropological investigations carried out on bones of warriors found during excavations in the ancient city of Ephesos.

Historic sources report that gladiators had their own diet. This comprised beans and grains. Contemporary reports referred to them as “hordearii” (“barley eaters”).

In a study by the Department of Forensic Medicine at the MedUni Vienna in cooperation with the Department of Anthropology at the Institute of Forensic Medicine at the University of Bern, bones were examined from a gladiator cemetery uncovered in 1993 which dates back to the 2nd or 3rd century BC in the then Roman city of Ephesos (now in modern-day Turkey). At the time, Ephesos was the capital of the Roman province of Asia and had over 200,000 inhabitants.

Using spectroscopy, stable isotope ratios (carbon, nitrogen and sulphur) were investigated in the collagen of the bones, along with the ratio of strontium to calcium in the bone mineral.

The result shows that gladiators mostly ate a vegetarian diet. There is virtually no difference in terms of nutrition from the local “normal population”. Meals consisted primarily of grain and meat-free meals. The word “barley eater” relates in this case to the fact that gladiators were probably given grain of an inferior quality.

The difference between gladiators and the normal population is highly significant in terms of the amount of strontium measured in their bones. This leads to the conclusion that the gladiators had a higher intake of minerals from a strontium-rich source of calcium. The ash drink quoted in literature probably really did exist. “Plant ashes were evidently consumed to fortify the body after physical exertion and to promote better bone healing,” explains study leader Fabian Kanz from the Department of Forensic Medicine at the MedUni Vienna. “Things were similar then to what we do today – we take magnesium and calcium (in the form of effervescent tablets, for example) following physical exertion.” Calcium is essential for bone building and usually occurs primarily in milk products.

A further research project is looking at the migration of gladiators, who often came from different parts of the Roman Empire to Ephesos. The researchers are hoping that comparison of the bone data from gladiators with that of the local fauna will yield a number of differences.