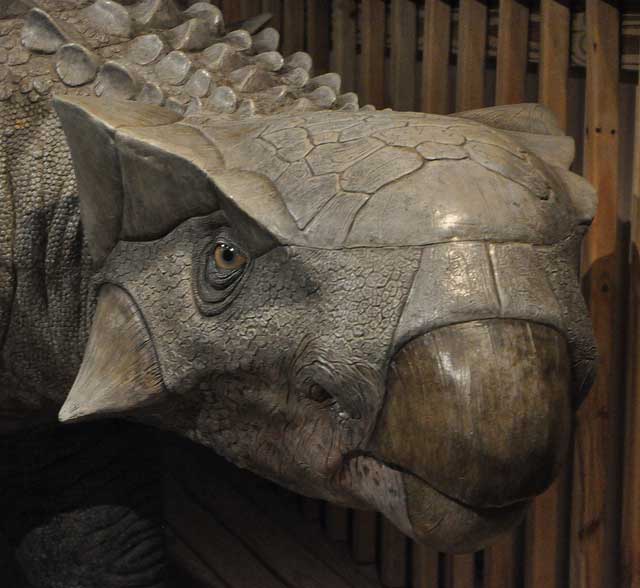 Sweating, panting, moving to the shade, or taking a dip are all time-honored methods used by animals to cool down. The implicit goal of these adaptations is always to keep the brain from overheating.

Now a new study shows that armor-plated dinosaurs (ankylosaurs) had the capacity to modify the temperature of the air they breathed in an exceptional way: by using their long, winding nasal passages as heat transfer devices.

Led by paleontologist Jason Bourke, a team of scientists at Ohio University used CT scans to document the anatomy of nasal passages in two different ankylosaur species. The team then modeled airflow through 3D reconstructions of these tubes. Bourke found that the convoluted passageways would have given the inhaled air more time and more surface area to warm up to body temperature by drawing heat away from nearby blood vessels. As a result, the blood would be cooled, and shunted to the brain to keep its temperature stable.

Modern mammals and birds use scroll-shaped bones called conchae or turbinates to warm inhaled air. But ankylosaurs seem to have accomplished the same result with a completely different anatomical construction.

“There are two ways that animal noses transfer heat while breathing,” says Bourke. “One is to pack a bunch of conchae into the air field, like most mammals and birds do–it’s spatially efficient. The other option is to do what lizards and crocodiles do and simply make the nasal airway much longer. Ankylosaurs took the second approach to the extreme.”

Lawrence Witmer, who was also involved with the study, said, “Our team discovered these ‘crazy-straw’ airways several years ago, but only recently have we been able to scientifically test hypotheses on how they functioned. By simulating airflow through these noses, we found that these stretched airways were effective heat exchangers. They would have allowed these multi-tonne beasts to keep their multi-ounce brains from overheating.”

Like our own noses, ankylosaur noses likely served more than one function. Even as it was conditioning the air it breathed, the convoluted passageways may have added resonance to the low-pitched sounds the animal uttered, allowing it to be heard over greater distances.