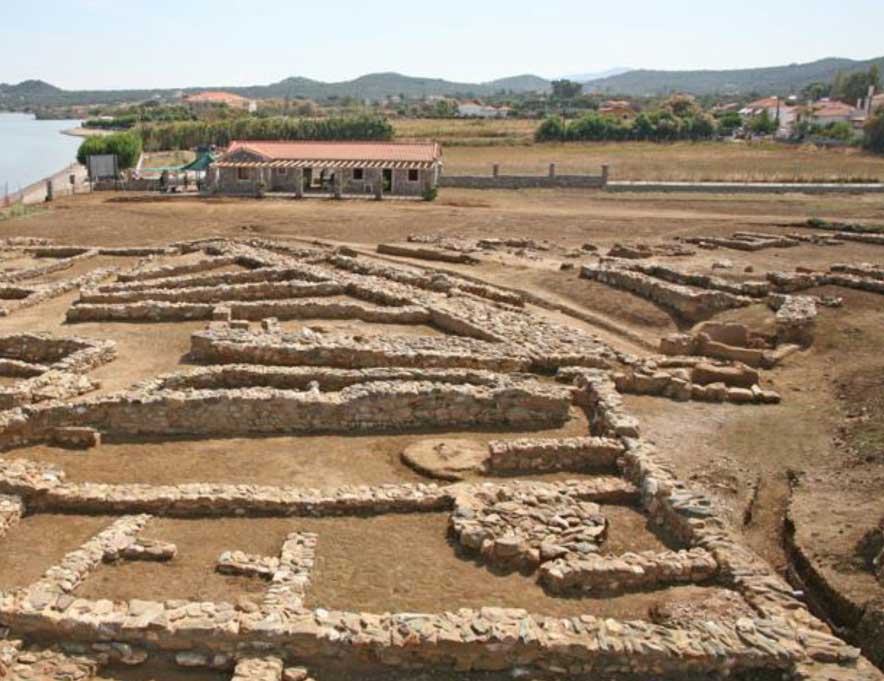 The prehistoric settlement of Thermi on Lesbos provides one of the earliest examples of urbanization in the Mediterranean, with urban features and town planning from the beginning of the 3rd millennium BC. With five main building phases of the Early Bronze Age, as well as Middle and Late Bronze Age levels, the town – on a sea route which joined the north and south Aegean and the West with the East – is part of a broad cultural horizon which includes the Balkans and Troy to the north, extending to Cyprus in south. There are contacts too with the Cyclades and Mainland Greece.

On Friday, November 14, 2014, at 7.00 p.m., Olga Philaniotou (Honorary Ephor of Antiquities) will give a lecture entitled “Thermi, Lesbos 1936-2014”, organised by the Aegeus – Society for Aegean Prehistory and the Swedish Institute at Athens.

Thermi was identified and excavated by Winifred Lamb between 1930 and 1933: her exemplary report was published in 1936. Lamb had back-filled all the trenches to protect the remains and the site remained invisible and inaccessible until 2005 when, on the initiative of the 20th Ephorate of Prehistoric and Classical Antiquities the refurbishment and presentation of Thermi was incorporated in the 2000-2006 Regional Operational Programme for the North Aegean. The work of uncovering and laying out the site was completed in 2008; supplementary trenches were excavated in 2011. The Ephorate’s work brought to light new evidence for the life of the settlement, not only in the Early Bronze Age but also during the period of its reoccupation in the Middle and Late Bronze Age.

The finds, which are numerous and of great variety, are now being studied. One of the archaeologists’ first observations is that the life of Thermi was not cut off at the end of the second phase of the EBA, as Lamb had supposed, but continued –at least for a time– in the third. Further, in the later levels, apart from the local imitations noticed by Lamb, imports from Middle Minoan Crete have been identified. Particularly interesting are the discovery of child and infant burials immediately adjacent to the Late Bronze Age building remains and the presence of potters’ kilns, the latter providing evidence of specialization in that sphere of production. The layout of the site for visitors was carried out with careful attention to the primacy of the archaeological remains and, where needed, with the use of locally sourced materials. Native shrubs retain the pathways and encourage local bird life.