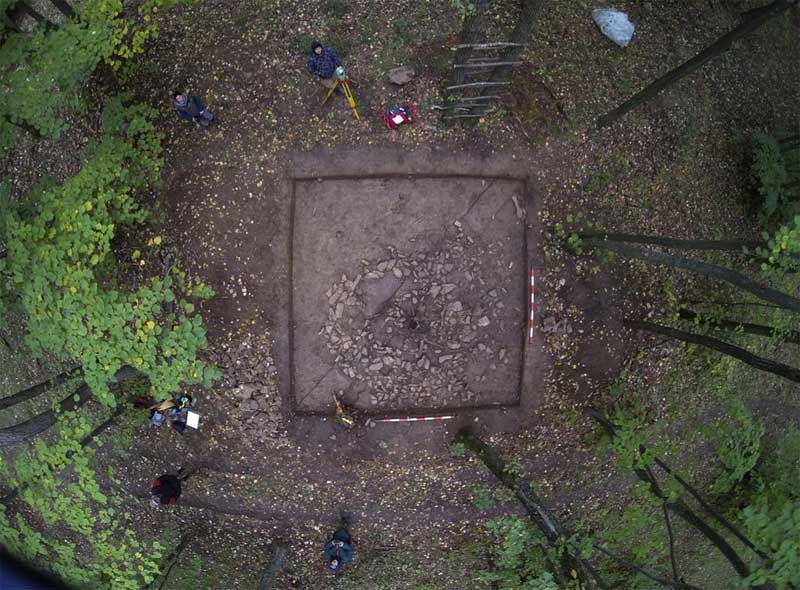 Archaeologists from the Institute of Archaeology, University of Rzeszów together with foreign experts have completed the sixth excavational season at the vast necropolis in Teliţa-Celic Dere of south-east Romania. The necropolis dates back to the 1st millennium BC and consists of nearly 100 mounds.

The studied cemetery sits alongside a settlement, which will allow the researchers to explore in depth the community of the time.

“It used to be a place of great strategic and trade importance. Not far from there was a ford, which was the last passage through the lower Danube. Further to the east the delta started and crossing was no longer possible,” said Dr. Tomasz Bochnak from the Institute of Archaeology, University of Rzeszów (Poland).

According to the researcher, the place had already been mentioned by Herodotus, the “father of history,” who wrote that the Persian king Darius, preparing an expedition against the Scythians in 512 BC, moved his army through the Bosphorus and to the lower Danube. Researchers believe that the trail of Darius led through the valley above which the burial ground is located.

Excavation of the burial mounds shows that the place had been a cultural melting pot for several centuries. Scythian and Greek influences overlapped in the region, which archaeologists see from the burial offerings.

“There is no clear answer to the question of who was buried in the mounds” said Dr. Bochnak. “The general name of the peoples who lived in the eastern and central parts of the Balkan Peninsula in the first millennium is the Thracians. These tribes had frequent contacts with the Greeks, and later the Romans” he explained.

The area where the cemetery is located, Dobrogea, was called “Little Scythia” (which indicates a significant influence of the nomadic people). Furthermore Greek colonies were located a few dozen kilometres to the southeast, on the Black Sea.

“We believe that the settlement complex in Teliţa-Celic Dere is one of the most important sites in Dobrogea, documenting the penetration of these diverse influences. The purpose of our expedition is to determine the range of sites, inventory barrows and study those previously unexplored,” said Dr. Bochnak.

Scientists were intrigued by a mound concealing two graves, where they found the burial of a young boy whose skull shows signs of trepanation. After cremation, the remains of the deceased were placed in the lateral part of the extensive mound. In the central part, the archaeologists found only the legs of another deceased, which had not been cremated.

“The rest of the body had been removed, but it was not a robbery, only part of a funeral ritual, as within the burial pit there was a short sword typical for the Scythians, and dozens of arrowheads. Probably soon after the funeral, the grave was opened and a large part of the body of the deceased removed,” theorised the researcher.

This year, researchers studied a mound, which turned out to be empty. It turns out that approximately 30 percent of the Celic Dere mounds are cenotaphs. Dr. Bochnak believes that they could belong to the people whose bodies could not be buried, like people who drowned or were killed in battle.

The Polish team of researchers also participated in excavations within the settlement, aiming to confirm the contemporaneity of the necropolis with it. The first results appear to ensure this.