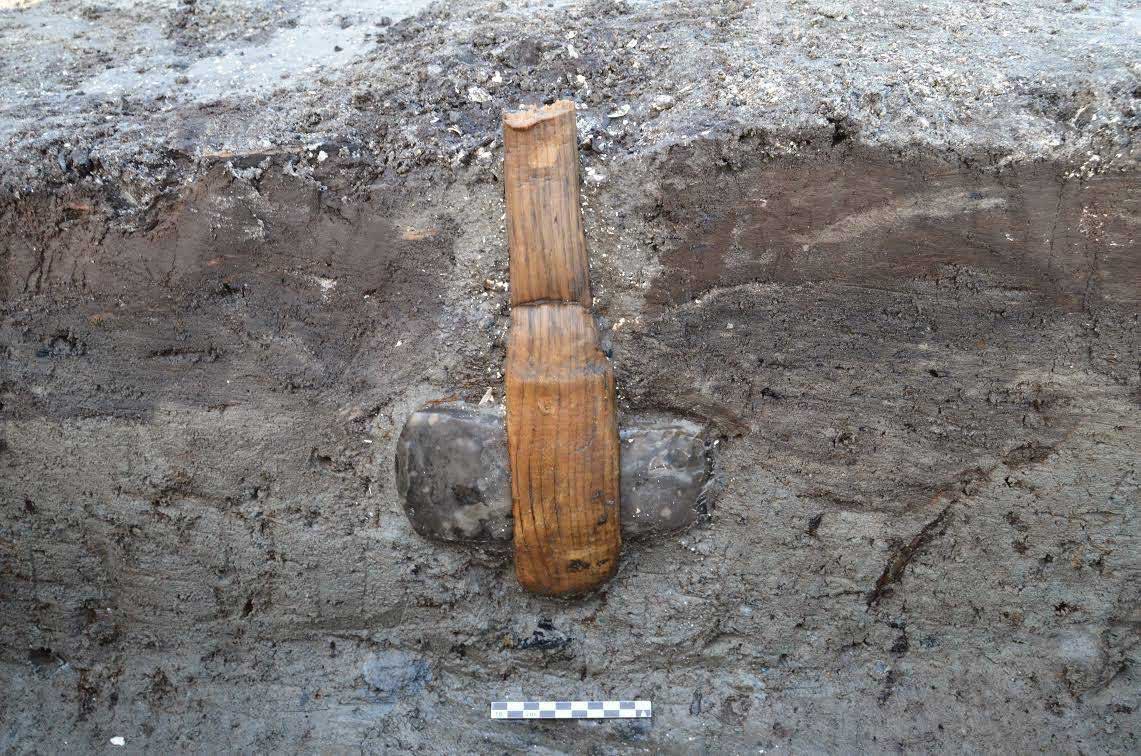 Population used the coast as an offering area

At the archaeological surveys ahead of the future Fehmarn Belt Fixed Link, archaeologists from Museum Lolland-Falster have found an incredibly well preserved hafted flint axe. This is an approx. 5,500-year-old thin-butted axe, which has deliberately been jammed into what during the Stone Age was the seabed off the southern coast of Lolland. Axes are among the typical finds from the Stone Age, but in hafted form, they are extremely rare.

“Finding a hafted axe as well preserved as this one is quite amazing. Because of the unique preservation conditions, we have found a lot of organic material during the excavations, including a large number of worked and upright wooden stakes. But we have also found more special artefacts, such as a paddle, two bows and some 14 axe shafts that were uncovered standing upright in what was the water’s edge during the Stone Age. When
we suddenly realised that we had actually found most of a complete hafted axe, stuck 30 cm down into the seabed, we knew that this was a very special find,” says Søren Anker Sørensen, Archaeologist at Museum Lolland-Falster.

Axes were important tools for Stone Age people who used them for working wood through millennia. However, they also played an important role at the introduction of farming, when the majority of the land was covered by dense forests, which had to give way to the agricultural society. The introduction of agriculture was accompanied by a different and more hierarchical social structure where religious/cultic elements were a part of life and death. Cults spread throughout the Neolithic period, and by megalithic tombs, for
instance, and in bogs and wetlands, you can see signs of extensive burial
customs and offering rituals.

The upright items that have been found in the excavation areas east of Rødbyhavn clearly show that the population used the coast as an offering area. The artefacts were deliberately jammed into the natural clay layer as part of a ritual deposit. The investigations in the area are still ongoing, and Museum Lolland-Falster’s experts hope that in the long term, they will discover more about the ritual area, and maybe other interesting sacrificial gifts will emerge from the soil of Lolland.