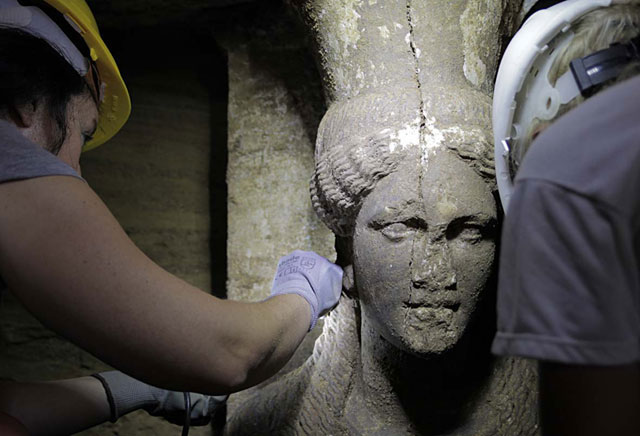 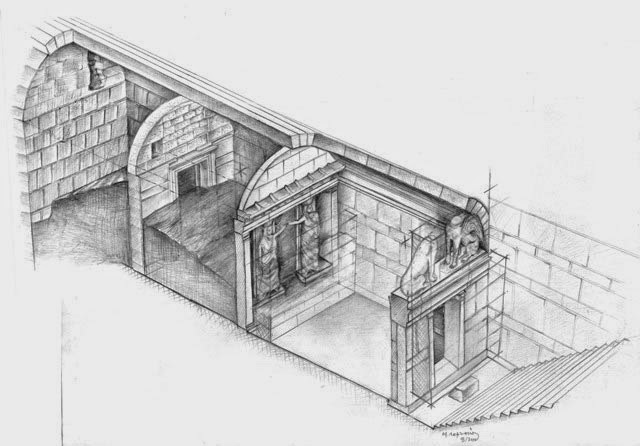 One step before the difficult path of research

Scientific announcements about Amphipolis were made on Saturday by head of excavations Katerina Peristeri, architect Michalis Lefantzis, and the civil engineer Dimitris Egglezos. Secretary General to the Ministry of Culture Lina Mendoni also spoke.

“Be patient, anthropologists will tell us”, answered Katerina Peristeri, Director of the Ephorate of Antiquities in Serres, to the questions regarding the skeletal material, during the scientific announcement about the excavation works on the Kasta Hill/Amphipolis she gave on Saturday in the packed hall of the Cultural Ministry.

About the skeletal material, Lina Mendoni said: “…The skeleton was found in fragments in and out of the burial trench. The skull was found at some distance from the trench, right outside of it the jawbone was located and inside the trench the biggest part of the skeletal material was found, and if one looks closely at the bones one will see that there are the big bones of the feet and the bones of the hands, the ribs, parts of the vertebral column, and the pelvis, which due to the fall of the upper stones is in a very ‘fragmental’ condition, not allowing archaeologists to determine whether it belongs to a man or woman”. Referring to the announcement Mrs. Peristeri had made previously about the debris being removed along with the bones, Mrs. Mendoni explained that this was done because “if modern genetic material, e.g. the hands of archaeologists, workers etc., touched the ancient one, the information possibly preserved in soil would automatically be lost or distorted”.

As for the excavation itself, Mrs. Mendoni pointed out that until now it hasn’t been characterized as systematic because from the moment the Sphinxes were discovered “it would have been too risky not to allow the procedure to go on”. Thus the excavation was not regarded as a systematic one, so that it could continue.

According to the announcements made by K. Peristeri, M. Lefantzis, and D. Egglezos, following information should be highlighted:

The burial trench in the fourth chamber was built at an earlier stage than the main monument, the historical earthquakes did not seriously affect the monument, while the well laid out plan of the building and the interior backfill were the main factors for its being preserved in such a good condition. Also, the hypothesis of a flood causing mechanical stress to the monument has not been confirmed. Stress was caused by the deposits of previous excavations.

A beam, probably from the epistyle behind the Caryatids, has destroyed the face of the eastern Caryatid, mentioned Mrs. Peristeri.

Regarding the movable finds excavated, according to Mrs. Peristery, they contain pottery (black-glazed, and not red-figured, even though the material has not been analyzed yet), and coins (for instance, of Alexander 3rd). Mrs. Peristeri stressed that the material is rich and has to be investigated. Furthermore she pointed out that the monument was a public work dating to the end of the 4th c. BC, an open monument with a rather limited visitability. “The first chamber with the staircase was visible from the precinct. Two columned in antis. From there we have access, but a limited one, which means that the precinct functioned as a retaining wall on the one hand and as a wall preventing an easy access on the other” Mr. Lefantzis said. He also underlined that the monument does not stand by itself, but belongs to a bigger ensemble.

According to the speakers the monument was sealed after its plundering during Roman times, the backfill in its interior is contemporary to the sealing walls, and the openings in the tympanums of the diaphragmatic walls were not made by grave robbers, but were used to bring the soil for the backfill into the monument. Also, it was made clear that no inscriptions were found, and some tectonic letters, such as E and A, found on the precinct and obviously incised for the ordering of the material match the dating of the precinct and are to be analyzed.

The discussion was coordinated by Emeritus Professor of Classical Archaeology of the University of Athens, Vasilis Lambrinoudakis, and archaeologist, director of the Cycladic Art Museum, Nikos Stambolidis, who stressed, as did the researchers of the monument, that from now on the difficult path of research begins.