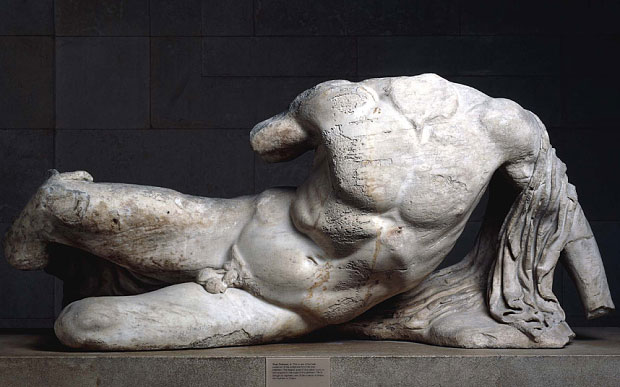 From today onwards, the headless statue of the Greek river-god ( identified by some as Cephessos) permanently in the British Museum is to be on display  in the State Hermitage Museum in St Petersburg , Russia as part of the celebrations for the institution’s 250th anniversary. Once adorning one of Parthenon’s pediments, the reclining male figure has been in the UK following the infamous activities of British aristocrat Lord Elgin on the Acropolis of Athens between 1801 and 1812.

The loan to Russia took place in the framework which allows any part of the British Museum collection to travel, and after the Museum’ Trustees decided to proceed with it fifteen days ago. Since the Trustees’ decision was likely to inflame the ongoing dispute between the Museum and Greece over the Marbles’ ownership, Ilissos’ figure arrived in Russia after a top secret journey.

The Hermitage was founded in 1764 by Catherine the Great to enable Russia to participate in the European Enlightenment. Following the Museum’s 250th anniversary, the statue of Ilissos will remain there till January 18, 2015.