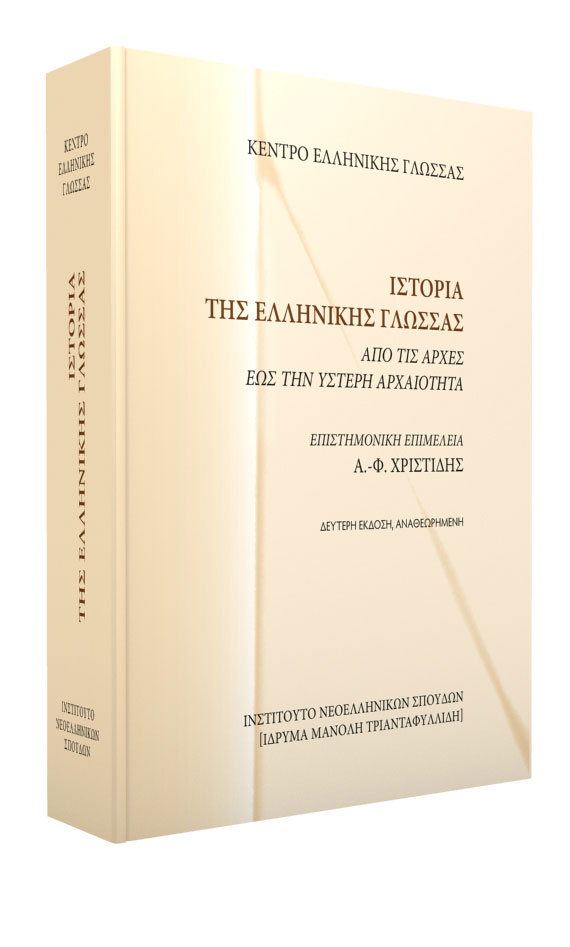 A History of Ancient Greek

From the Beginnings to Late Antiquity

The second, revised edition of the book A.-F. Christidis (ed.), A history of Ancient Greek: from the beginnings to late Antiquity is now available. It has been designed and implemented by the Center for the Greek Language and it is published by the Institute of Modern Greek Studies.

This collective work consists of 127 contributions, written by 80 Greek and foreign researchers. It examines the history of Ancient Greek from its Indo-European origin to late antiquity, incorporating it in the triptych language-history-culture.

The volume consists of an Introduction, in which the editor examines the historiography of the Greek language, and 9 sections: The first section discusses the basic aspects of the phenomenon of language; the second one focuses on the interplay between language and history and its role in shaping the Greek language; the third section describes the mosaic of dialects making up the Greek language until the emergence of Koine in the Hellenistic period; the fourth section examines the structure and evolution of Ancient Greek from the 5th century B.C. to late antiquity: phonology, morphology, syntax, lexicon, etc.; in the fifth section, the contacts between the Greek language and other languages come to the fore; the sixth section focuses on translation practices; the seventh one traces the fortunes of Ancient Greek in the fields of literature and science; the eighth section describes attitudes and practices towards language in antiquity; and the ninth one focuses on the fortunes of Ancient Greek in the medieval and modern period, both in Europe and in the context of modern hellenism.

The volume also includes three appendices, addressing more specific aspects of Ancient Greek: script issues, special uses, etc. The volume ends with four indices. The majority of the contributions are accompanied by excerpts from Ancient Greek texts, together with their translation in Modern Greek, which facilitate understanding of the issues addressed.

This second, revised edition contains some additional contributions, first included in the book’s English translation, which was published in 2007 by Cambridge University Press.