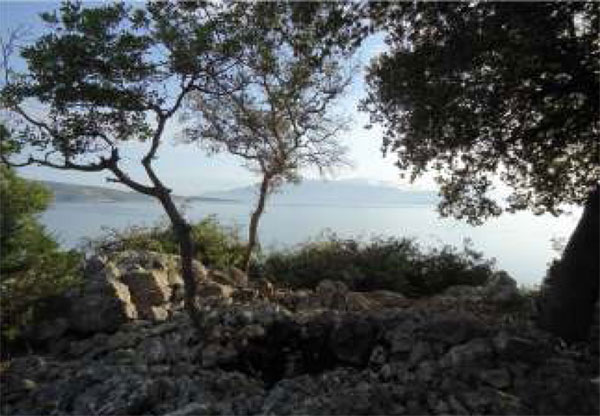 Meganissi, east of Lefkas, is the largest island in the part of the Ionian sea lying between Lefkas, Ithaca and the western Acarnanian coast. The chersonese of “Podi” in the southwest edge of the island, is a narrow strip, 6.5km long, with steep, vertical slopes and a few olive groves on some of the slopes, uninhabited and unapproachable until 2011.

Dr Olimpia Vikatou, Director, Ephorate of Antiquities in Aetolia-Acarnania and Lefkada will address the topic “The Tumuli of Meganissi” on Thursday, December 18th, 2014. This will be this year’s 3rd meeting of the Mycenaean Seminar. The lecture will be in Greek.

As explained in the abstract of the presentation, in 2011 seven tumuli were identified on Meganissi, with the help of a local resident of the island, all of which had been illegally excavated. The local Archaeological Service conducted an excavation for brief periods during 2011, 2013 and 2014, with particularly significant results, yielding very important evidence for the occupation of the area during the end of the Mycenaean period.

More specifically, a total of 15 tumuli of the SubMycenaean period were investigated, located near the top and on the slopes of the chersonese. They are impressive monuments, built in a prominent position, with an unlimited view of the Ionian sea, the finds from which suggest that their occupants had been warriors. In addition to that, on a small piece of flat land by the sea, with access to a good harbor, at the site of “Myli”, near one of the tumuli, were investigated settlement remains.

Another interesting aspect of the site is the discovery of Mycenaean and SubMycenaean pottery at the steepest parts of the chersonese, at the sites of “Kastri” “Tourlo” and “Samaria”. The extant evidence provides the first indications for the existence of a new archaeological site of the end of the Mycenaean era and of the Dark Ages, which included an extensive, idiosyncratic necropolis and a settlement. This period is still unattested at the neighbouring island of Lefkas, the nearest island to the site with which direct contacts have been established, and where recent investigations have uncovered remains of the last Mycenaean period. The latter is being now identified, quite emphatically, on a small island lying on the important sea roads of the Ionian sea, thus placing Meganissi, after Kephalonia, Ithaca, Aetolia and Acarnania, on the map of the “cultural koine” of western Greece.

The meeting will take place will be at 19:00, in the A. Argiriadis Amphitheatre
(Central building of the University of Athens Panepistimiou 30).