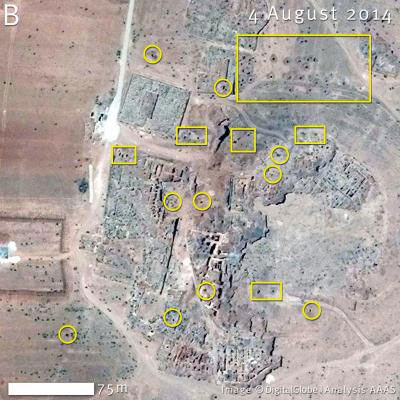 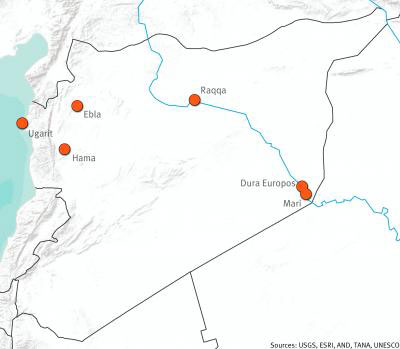 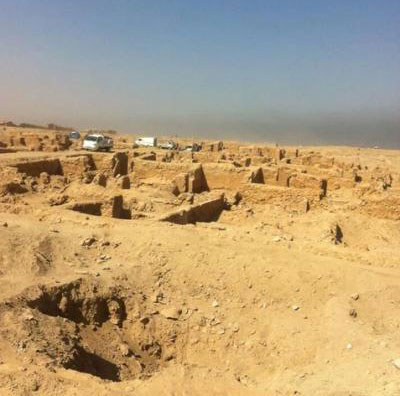 By the American Association for the Advancement of Science

Four of six major archaeological sites in Syria have been heavily looted and damaged, according to a AAAS analysis of high-resolution satellite images that documents the extent of the destruction.

The report analyzes six of the 12 sites that Syria has nominated as World Heritage Sites: Dura Europos, Ebla, Hama’s Waterwheels, Mari, Raqqa, and Ugarit. A forthcoming report will analyze the additional six sites.

“As we continue to study the conditions at Syria’s important cultural sites, we have observed significant destruction that is largely the result of conflict. However, unlike our previous analysis of Syria’s World Heritage Sites, we’re seeing a lot of damage that appears to be the result of widespread looting,” said Susan Wolfinbarger, director of the AAAS Geospatial Technologies and Human Rights Project, which authored the report. Researchers from the University of Pennsylvania Museum’s Penn Cultural Heritage Center and the Smithsonian Institution also contributed to the research.

“This report helps us understand how extensive the actual damage is to Syria’s cultural heritage. It will inform future emergency preservation efforts,” said Brian Daniels, director of research and programs at the University of Pennsylvania Museum’s Penn Cultural Heritage Center.

In the report, images from 2014 show numerous pits throughout three sites where ancient cities once stood. The pits generally do not appear in similar images from 2011, when the conflict in Syria began. “We interpret these pits as evidence of looting due to the distinct craters visible within the satellite images,” said Jonathan Drake, a senior program associate at AAAS.

“This type of documentation really allows us to make a firm statement based on scientific observation of things that have happened at a site,” said Wolfinbarger.

“Sometimes when things are reported in the news media or social media, details can be obscured or purposefully misconstrued. But this analysis is replicable. We can say definitively, ‘we see this.’ And when it is tied it in with other types of information, satellite imagery can give us a more complete picture in parts of the world that are difficult to access.”

“These images show the destruction of ancient artifacts, architecture, and most importantly, archaeological context that is the record of humanity’s past,” said Katharyn Hanson, a post-doctoral fellow at the University of Pennsylvania Museum’s Penn Cultural Heritage Center and a visiting scholar at AAAS. “From the origins of civilization to the first international empires, Syria’s cultural heritage and these sites in particular are vitally important to our understanding of history.”

Dura-Europos: The most extensive looting

The most extensive looting identified in the report was at Dura-Europos, which was founded in the 3rd century B.C. and served as a frontier city as well as the main hub for caravan routes. The site represents a blend of cultural traditions, including Greek, Mesopotamian, Aramaic, Persian, and Roman influences. There have been numerous reports of damage through social media and news reports, and the AAAS report now documents the extent of this activity.

Based on the imagery analysis, 76% of the area within the city wall had been damaged by April 2014, and the looting pits were so close together it was impossible to distinguish individual pits, the researchers report. Looting pits outside the city wall were less dense but still numerous; approximately 3,750 individual pits were observed. Images from 2 April 2014 show four vehicles among the ancient Roman ruins in close proximity to the looting, suggesting that the disturbances at the site may have been ongoing at that time, according to the report.

Ebla: Military compounds have been constructed on the site

The second site described in the report is Ebla, the site of an important kingdom in the Early Bronze Age. The site is best known for its archive of several thousand written tablets that “revolutionized knowledge regarding the ancient history and political economy of the region,” the report says. Ebla is constructed out of mud brick, so without preservation it is vulnerable to erosion.

The images in the analysis show looting pits, including 45 new holes observed between 18 August 2013 and 4 August 2014, as well as eroded walls, earthen berm fortifications, and heavy vehicle tracks. Military compounds have been constructed on the site, likely due to the fact that the site is elevated over the surrounding plain and provides a good view of the area.

Mari has witnessed violent clashes during the conflict

Looting is also widespread at the ancient Mesopotamian city of Mari, which was founded in the early 3rd millennium B.C. and prospered as a node on the trade routes. Like Dura-Europos, Mari is located in the Deir ez-Zor province that has seen violent clashes during the conflict. The Albu Kamal region, where Mari is located, came under the control of ISIS in June 2014.

The looting appears to have ramped up during the last year. The researchers identified 165 visible pits dug between August 2011 and March 2014 (an average of 0.17 pits formed per day). Between 25 March and 11 November 2014, however, they identified 1,286 new pits, an average rate of 5.5 pits dug every day over the seven-month period.

The fourth site is Raqqa, and important city center that exemplifies the transition of a Greek/Byzantine urban center into an Islamic city by 796 A.D. Since 2013 Raqqa has been at the center of the conflict in Syria. After fighting by opposition groups, ISIS took control of the city in October 2013, and in September 2014, the United States and partner nations began an airstrike campaign against ISIS in Raqqa.

The observed damage in vicinity of the Tentative World Heritage site in Raqqa appears to be different from that of the other sites in the analysis, according to the report, with little evidence of direct military conflict. “Rather, when damage is present, it appears to be nearly total and targeted, with specific buildings disappearing while the surrounding buildings remain untouched,” the report states.

This phenomenon appears too precise to have been caused by the Syrian Arab Republic Government’s military forces, and while it is well known that the United States and other partner air forces have the ability to deliver munitions with high precision, the destroyed sites are all cultural sites located within the UNESCO Tentative World Heritage site boundary, according to the report. “The more plausible explanation is that the demolitions in the vicinity of the Tentative World Heritage site’s boundaries are the result of actions by ISIS,” the report states.

Hama and Ugarit: No apparent damage

The two other areas that the researchers analyzed — the historic waterwheels of Hama, which raised water up to aqueducts for drinking and irrigation, and the ancient site of Ugarit, a mostly stone city that connected the ancient empires of Mesopotamia with those of the Mediterranean — do not appear to have been damaged.