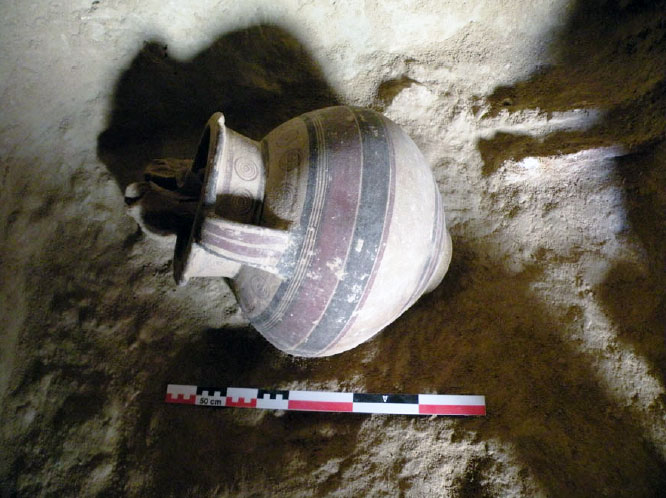 The Department of Antiquities, Ministry of Communications and Works, announces the completion of the third excavation season at the Kition-Pervolia necropolis by the French Archaeological Mission of Kition and Salamis, under the direction of Dr Sabine Fourrier. The main aim of this year’s excavations was the exploration of the Archaic tomb, whose dromos (passage leading to the chamber) had been partially explored in 2013.

The tomb proved to be intact. It possessed a very large dromos, and its chamber had the same shape and dimensions (3x3m) as the smaller tombs of the Classical period. 17 individuals were buried in the chamber. Most of them were primary inhumations. Secondary inhumations were also recorded within a large bichrome ware amphora. The amphora contained the skeletal remains of two individuals, one adult around 20 years old and a child between 8 and 10 years old.

The ceramic vessels found in the tomb’s chamber and dromos date to the Cypro-Archaic I period. Many fine Phoenician imports were found (e.g. jars, bichrome ware and red slip jugs and “Samaria ware” dishes).

Two dromoi, belonging to unfinished tombs, were located immediately to the West of the Archaic tomb. When these dromoi were cut in the bedrock at the end of the 6th century BC, the existence of the large Archaic tomb had obviously been forgotten.

Another Archaic tomb was located to the North-West of the excavated area but only its dromos was excavated (partially). The original fill was preserved in the Eastern part of the dromos, but a large (looter’s?) pit occupied its Western part. Based on the material retrieved from the pit, the looting had occurred in antiquity.

Recesses cut in the walls of the dromoi were also found again this year. They contained, as usual, small ceramic vases and small pieces of bronze jewelry. Two unusual recesses were found to the South of the excavated area. They were cut, not in the walls of a dromos, but in the surface of the rock, with no clear association with a specific tomb. They contained small vessels of plain ware that can be dated to the Cypro-Classical II period (4th century BC).