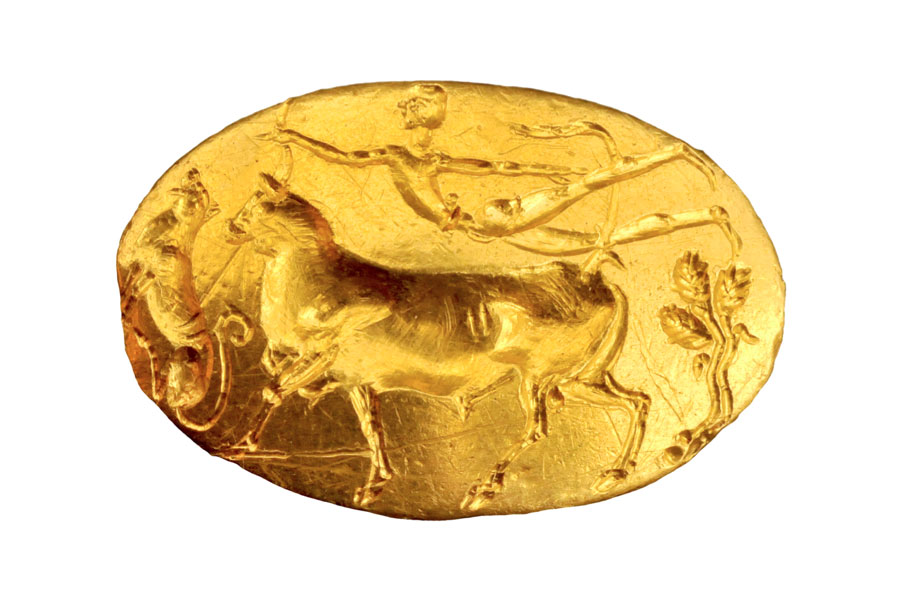 The Ring of Theseus on display for the first time

The Ring of Theseus, a Mycenaean gold signet ring unearthed in the Plaka district of Athens in the 1950s, went on display on Monday for the first time at the National Archaeological Museum of Athens.The Minoan popular scene of bull-leaping is depicted on the ring bezel, flanked by a lion and a tree.

The choice of this particular scene on a ring that was to be worn by the rulers of Athens indicates a preference for a Minoan theme and its symbolic connotations.

We do not know the reason for this inclination, but, nonetheless, it generates a variety of interpretive associations into our mind.

The ring of Theseus, along with a contemporaneous stone vase fragment depicting the same theme from the Acropolis of Athens (Hall 3 of the Museum), enliven in our eyes the connection between myth and archaeological finds.

The ring, Minotaur and King Minos

The legend has it that Theseus, the first king-founder of the city of Athens, overpowered the fierce Minotaur as well as formidable King Minos of Crete.

Yet another Athenian myth, according to which King Minos threw his signet ring into the sea and then dared Theseus to find it, seeks its magical confirmation in the most beautiful manner through the present exhibit.

Found in the Anafiotika Houses of Plaka

According to the testimony of the first owner, its place of provenance is the Acropolis of Athens. A random find from the Anafiotika Houses (neighbourhood at the foot of the Acropolis hill), the ring turned up among the eart deposits that were thrown down the slope in the course of the works for the construction of the Old Museum extension in the 1950’s.

On display for the first time in Greece.