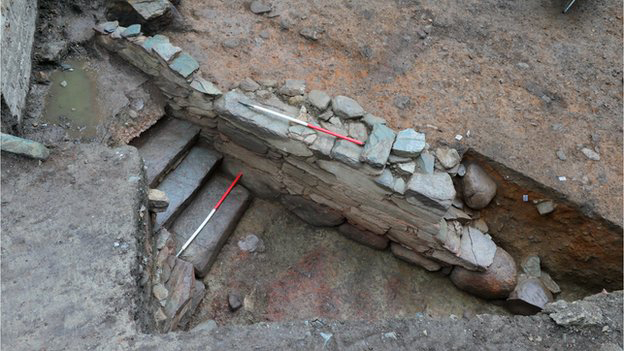 The structure pre-dates the walled city

An excavation carried out in Londonderry, Northern Ireland, has brought to light part of a building that is thought to have burned down during the Cahir O’Doherty rising of 1608, whose lands had been confiscated for colonization during the reign of King James I. The structure pre-dates the walled city.

The building, only a very small part of which has survived, had stone foundations and a cellar above which the upper floors were constructed of timber. When the building burnt down its wooden walls and roof collapsed into the cellar where they have now been found just over 400 years later.

A collection of artefacts was also unearthed during the dig including musket balls, a small cannon ball, pottery sherds, clay pipes and, a rarity on archaeological excavations, a number of intact wine bottles. The earliest find was a sherd of medieval pottery dating to AD1200-1400.

Minister Durkan said: “This is a truly exciting and important discovery. Archaeologists working for the Apprentice Boys have uncovered the earliest dated building in Derry and it is fitting that some of the artefacts uncovered will now go on display in the new museum.

“The building’s alignment is east-west and has been dated to the early 1600s. The east-west alignment is radically different to our present day Walled City street pattern. This clearly shows the building reflects the earlier street pattern based on the ecclesiastical settlement that pre-existed the plantation town of Londonderry. The building was burnt down prior to the construction of our Walled City and the ‘best-fit’ event for that fire would seem to be the 1608 O’Doherty rebellion when all the houses in Derry were burnt by Cahir O’Doherty’s troops.

“A very small fired-clay tobacco pipe that dates to the period of Elizabeth I has further helped to date the early building. A small cannon ball from the time of the O’Doherty rebellion in 1608 was also found on the cellar floor of the early building but we may never know if it was fired in anger.

“Although the dig doesn’t appear to have found any remains dating to the 1689 Siege of Derry, rare finds have been uncovered including two complete glass bottles and near complete plates dating from the 1700s.

“These important discoveries will add value and content to the information discovered on the successful NIEA led community dig at Bishop Street car park in 2013.”

Billy Moore, General Secretary of the Apprentice Boys Association, said: “It has been fascinating to see what this archaeological dig has uncovered. We hope that once the archaeologists have had a chance to review their findings, we will be fortunate to identify that some of the artefacts relate to the period of the Great Siege.

“We are pleased and delighted that the dig has added significantly to the history of Londonderry. We eagerly look forward to placing the information uncovered and some of the artefacts on display in our new visitor centre, which we anticipate will open in the summer of 2015.”

The building and artefacts were discovered during an eight week excavation in the area formerly occupied by the Walker Memorial Garden on Society Street. The dig, undertaken by commercial archaeology firm Gahan and Long under licence from the Northern Ireland Environment Agency (NIEA), was a requirement of planning conditions ahead of the new Apprentice Boys of Derry’s visitor centre.