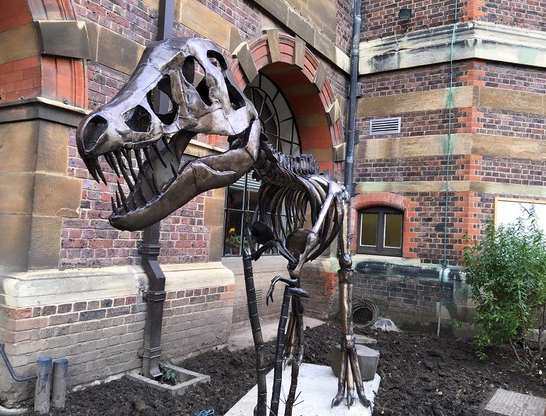 Clare, a new landmark for Cambridge

Cambridge gained a new landmark when Clare, a sculpture of a T-rex, was unveiled at the Sedgwick Museum of Earth Sciences last week.

Clare is a metal sculpture of a T-rex, and she made a spectacular debut as the centrepiece for last summer’s Clare College May Ball which had a ‘primordial’ theme.

The puzzle of what to do with the sculpture once the celebrations were over was solved when the Sedgwick Museum of Earth Sciences expressed an interest in homing her.

The morning after the party, the model T-rex was trundled through the centre of Cambridge by a posse of dinosaur-attendants clad in high-vis tabards. She has seen out the winter hidden in a corner of the Downing Site.

Now Clare has found a permanent home outside the entrance to the historic Sedgwick Museum, the oldest geological museum in the world, where she is likely to become one of Cambridge’s best loved landmarks.

Clare was formally welcomed to her new stamping ground on the 0th of January 2015. The unveiling was attended by Clare’s creator, the sculptor Ian Curran, along with members of Clare College and the Department of Earth Sciences.

Sedgwick Museum director, Ken McNamara said: “The sculpture will add to the excitement experienced by visitors as they arrive to see our unique collection. It includes thousands of fossils, including dinosaur remains and a life-size Iguanodon.”

The model is a half-size artistic representation of the iconic T-rex, a species which lived 66-68 million years ago. It was made by Curran in his Doncaster workshop and travelled down the A1 to Cambridge on the back of a lorry.

Curran said: “It’s tremendous to see one of my sculptures in such a prestigious location. I’m thrilled that the Sedgewick Museum has her on display where she will be seen by so many more families.

“Normally my work is displayed on my front lawn for the benefit of local children and the grandparents who bring them, so this wider audience is an absolute thrill.”